Audio Systems for the Tesla Model S and Model X

Our analysis includes all Model S and Model X audio systems.  We’ll continue to update this analysis as Tesla makes further changes. As of mid-2018 and later, all Model S and X vehicles include Premium/Ultra High Fidelity System (UHFS).  The new Palladium 2021 LR and Plaid S/X have a new 22 speaker sound system. We’ll update this when more details are known.  (Jan-2022 Update)

*Originally called Sound Studio, then UHFS (Ultra High Fidelity Sound), and later Premium.  Prior to March-2018, included AM radio.
** In mid-2018, XM is included in all vehicle configurations. Prior to mid-2018, it required a Pano roof, as the XM antenna needs to go through roof glass. Cars in 2012/2013 without pano roof could have XM, as the antenna was mounted in the hatch glass on these older vehicles. North America Only.
*** Not stated as RMS, so presumed to be peak power, typical of vehicle audio specifications.
**** Refreshed Model S only, manufactured April 2016 and later

* It’s not clear the UHFS/Premium sound door speakers can be purchased from Tesla by itself. Only the assembly which includes the speaker is listed in the parts catalog. 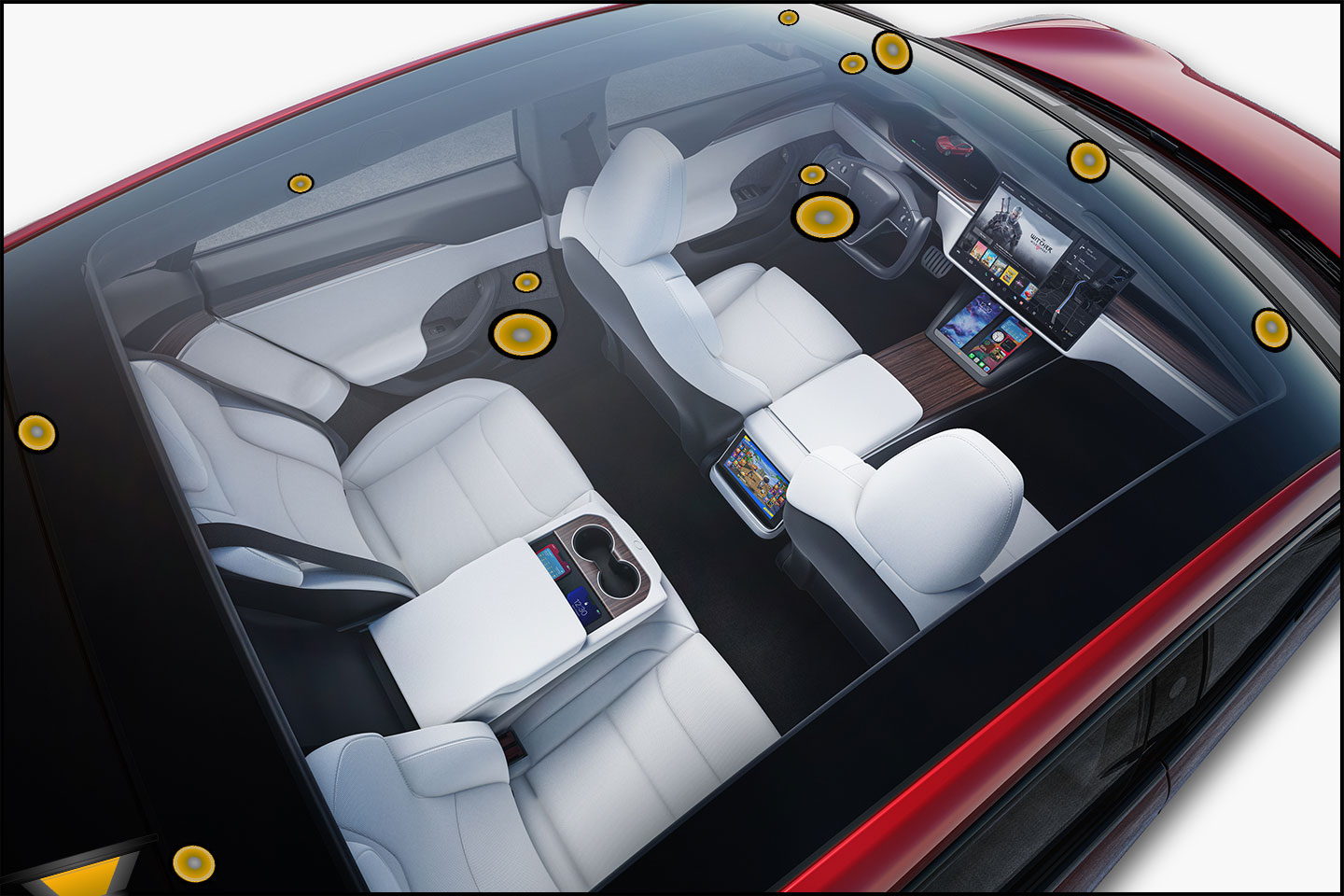 Amplifier and 7 Speaker placement for Model S with Standard Sound

The audio systems for both the Model S and Model X were originally designed by s1nn. Harman International Group acquired s1nn in early 2015. Harman owns major brands such as Harman Kardon, Infinity, JBL, Lexicon, and Mark Levinson. They also produce high-end vehicle audio systems for a number of vendors including Audi, Bentley, Porsche, and now Tesla.

The audio system is integrated into the MCU by Tesla and manufactured by Tesla. The primary amplification module in all cars resides as the back part of the main display and provides 200 watts of power. 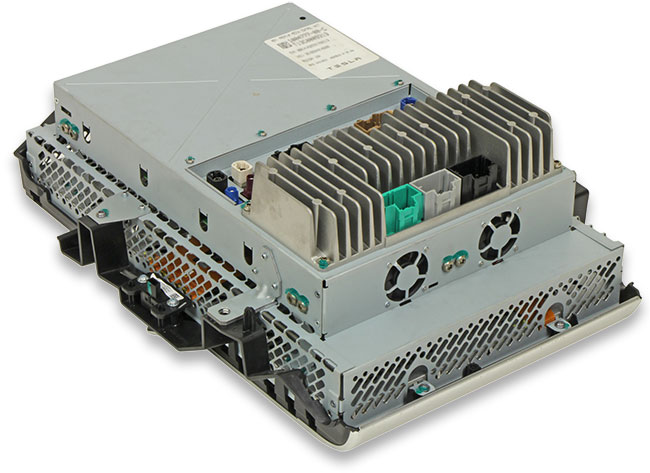 The sub-woofer is mounted in the right rear corner and is not directly visible. Tesla uses a custom-designed 6.6 gallon (25-liter) enclosure for an improved low-end response. This enclosure is considerably larger than most other sub-woofer-equipped luxury vehicles.

Delving deeper into the design, the audio path uses a DSP (Digital Signal Processor) to better control the sound dispersion in the car for all occupants. This DSP is software controlled allowing the designers a great amount of flexibility to tune each speaker to the car.

It was reported by s1nn that the Tesla system includes Volume Management. This automatically changes the volume and bass level based on the vehicle’s speed (i.e. noise from outside) and the climate control’s fan setting (inside noise) to maintain clarity as these noise sources get louder or softer. My own analysis with a spectrum analyzer did not see any volume changes at different frequencies with fan speed changes, so s1nn may not have actually included this feature on our cars. This test was done with 7.0 software and an MS with the standard audio package for 800 Hz to 8 kHz.

Signal sources include Internet streaming via WiFi/Cellular, FM and FM HD Radio, XM Radio (in the North American Premium package), Bluetooth (compressed), and via the USB ports (MP3, FLAC, AAC, WAV, etc.).  S/X vehicles with MCU1 (made before March 2018) also include AM radio. Tesla includes a DAB/DAB+ radio in most cars outside North America as standard. Prior to mid-2015, DAB/DAB+ only came with the Premium package.

The early audio amplifiers are made in Hungary, while the speakers are made for Tesla in China. Most of the equipment appears to be created specifically for Tesla and is not a rebranded product. Tesla logo appears not only on labels, but molded into plastic parts such as the polycarbonate speaker baskets.

The tuner module for FM, FM HD, and AM radio for MCU1 cars was built by Panasonic Automotive in China and provides analog audio to MCU1. It is located under the dash on the far left. Premium systems have a different module that adds in XM radio. Outside North America, the module includes the DAB/DAB+ radio. MCU2 switched to a digital FM/XM tuner made by Harmon in Mexico.

Tesla offers a Dolby ProLogic Surround option with the Ultra system to convert stereo source maternal into surround sound on MCU1 equipped cars. The general opinion is this distorts music more than it helps, and should be left off. A software improvement was made in late 2017 that improved the quality, such that some owners now like the option. The system only supports stereo source material. For example, FLAC files support up to 8 channels, but only 1-2 channel mono/stereo files can be used from USB files.

With MCU2, Dolby Surround was dropped and a new Immersive Sound option became available. In listening to it off and active, we liked how it sounded. Worth trying out. All Model 3/Y cars and S/X vehicles made after February 2018 include Immersive Sound.

Use the tone and balance controls to adjust the system to your personal preferences. For example, if you have some hearing loss in the upper frequencies you might increase the treble. If you listen to books or talk shows, you might increase the mid-range to improve vocal clarity. Be aware that other passengers may not have the same hearing desires as you so sometimes a compromise will be necessary. 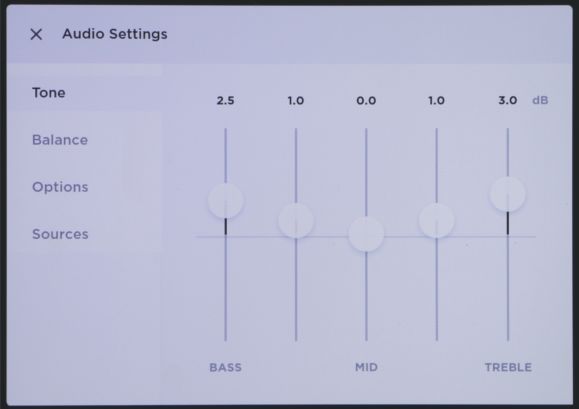 While you can jack all the tone controls up to increase the volume, unless you really need that extra volume, it may add distortion between the bands. It’s is best to have a least one tone control set to zero and adjust the others to get the overall effect you want.

Depending on if you have any passengers, you may want to adjust the balance to the center or favor the front or rear soundstage. A standard system has weaker rear speakers, so you may shift the fade further back than those that have the Ultra system. 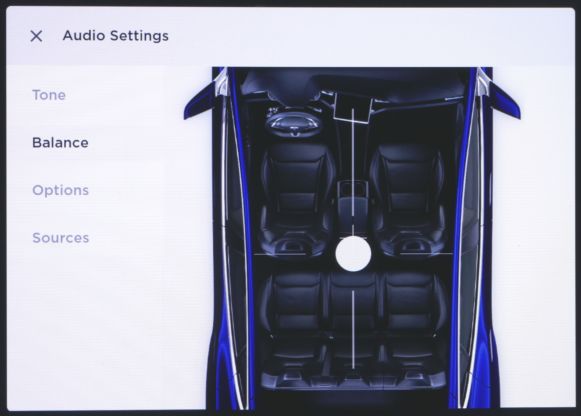 Maybe this is of interest to the community.
It is an interview with the developers of the original Model S soundsystem in the UK audio & video magazine/website WHAT HI*FI!
https://www.whathifi.com/features/how-tesla-developed-in-car-audio-system-model-s-saloon

As an addition:
I just upgraded my MCU1 to MCU2 on my 2013 Model S with Premium Sound. So far not a positieve experience…
The sound changed dramatically and it now is lifeless, harsh and uneven.
I found several people having the same issue.

Thanks for the link. I was aware of much of S1nn’s work with Tesla, but nice to see more details.

On the MCU1 to MCU2 upgrade, which I also did, play with the immersive sound and the equalizer. I found many strongly really liked one choice over another – but not a lot of consistency in what people felt was best. Some liked immersive sound turned off a lot better than other choices – so it may be just a simple option to improve it for you. Also, check that every speaker is producing sound. It’s possible your MCU2 was not connected properly and/or is defective – a very rare situation.

Thx for the feedback. I will try the different options.
As a startingpoint I found this comment by one of the TMC members.
https://teslamotorsclub.com/tmc/threads/mcu2-upgrade-audio-eq-balancing-coming-from-mcu1.203115/page-7

There should be a UHFS mid-woofer listed for the front doors that are 200mm vs 160mm. The part number for the 200mm front door speakers is 1004833-03-A. Can you add to the Speaker Components table? I believe the impedance is 1 Ohm (based on label attached to back of speaker magnet).

I see the issue. Tesla doesn’t sell that part by itself, only the 1004833-11-A which is the assembly of the speaker and mounting. I have it listed as the “Subwoofer assembly”, although Tesla doesn’t state any name for this speaker. The 160mm is the mid-woofer for the non-UHFS door speaker. You are correct – it is a 1 ohm, as I have listed. Still worth a note about the 1004833-03-A part. I’ve updated the page. Thanks!

Shouldn’t the UHFS part number for the front speakers be listed on the Speaker Components table above? 1004833-03-A

Both the front door and front dash speakers are in the table. I couldn’t find any part 1004833-03-A in the Tesla parts catalog. Where did you see this part?

Local shops usually asked me more than $2000 for Sound deadening and custom brackets. So I made it by myself.

My Model S produced in October of 2017 has 2 additional USB ports built into the rear of the center console (between the front seats) for rear passengers.

Thanks – updated the test to include this.