There are a number of locations where you can tap power to add accessories such as dashcams, radar detectors, tire inflators, and more. We examine some of the more popular locations and explain the various limitations and appropriate uses.  (Sep-2022)

Here is a sample list of common powered accessories and the power they require. Most devices rated for 12v will work from 10 to 16 volts. Some devices may work best with power 24/7, such as a dashcam, while you may prefer that others turn off when the car is off.

For decades vehicles use a “12-volt” system for accessories, controls, lights, and more.  ICE vehicles with lead-acid batteries and an alternator for charging usually mean a typical voltage of 13 to 14 volts. For older Tesla vehicles that use an AGM lead-acid battery in combination with an inverter charger, the voltage normally runs a little higher, in the 14-15 volt range.   Today’s Tesla vehicles use a Lithium-Ion 16v battery for accessories, controls, lights, and computers.  This typically has a system voltage in the 15-16 volt range.  All these systems are commonly referred to as 12v systems, even though the voltage is often quite a bit higher.

We generally use “12v” to include all systems which provide 12 to 16 volts.  In videos, we show the actual voltages we encountered on Tesla vehicles.

Our analysis shows the results of each connection’s voltage state in various vehicle modes.  Other than the vehicle’s “On” state, the car is locked with no people inside. We did note that the car locked or not locked does not change the results. We also tested HVAC modes with Sentry off, such as Keep, Dog, and Camp modes.

We tested each connection as noted with a resistive load and confirmed no error messages appeared.  Using a higher load may risk blowing a fuse or tripping the electronic fuse. Tesla does specify the Power Socket can handle a peak current of 16 amps, with a continuous current of 12 amps.

Items shown with a delay indicate the power remains until the delay period expires. These may remain on for a longer period of time if data is being downloaded or uploaded, the car is being connected via the phone app, charging, or the glycol pumps are running to heat or cool the battery.

There are many locations where you can get power for accessories.  We’ve identified frequent locations owners like to use, either for the physical location or how it provides power.

The Diagnostics connector provides limited power and operates differently depending on the vehicle type and vintage. 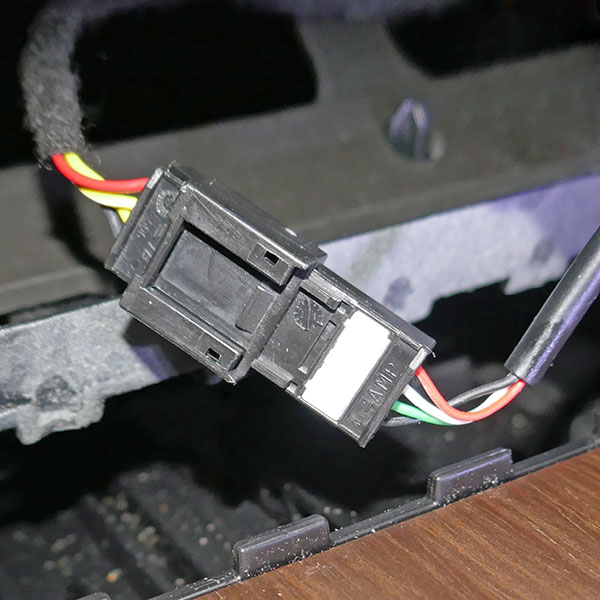 The drive controls consist of the touch buttons adjacent to the emergency flashers to set the drive modes Park, Neutral, Drive, and Reverse. This can source 1 amp, but at 2 amps it will “blow”.  It’s a good source for a dashcam, as most dashcams require less than 500 mA.

Model S/X 2021+ LR/Plaid:  the black 4-pin  connector is accessed after removing the phone chargers.  Video 1 shows in detail. The outside pins provide power. The red wire is 12v, and the black wire is Ground. 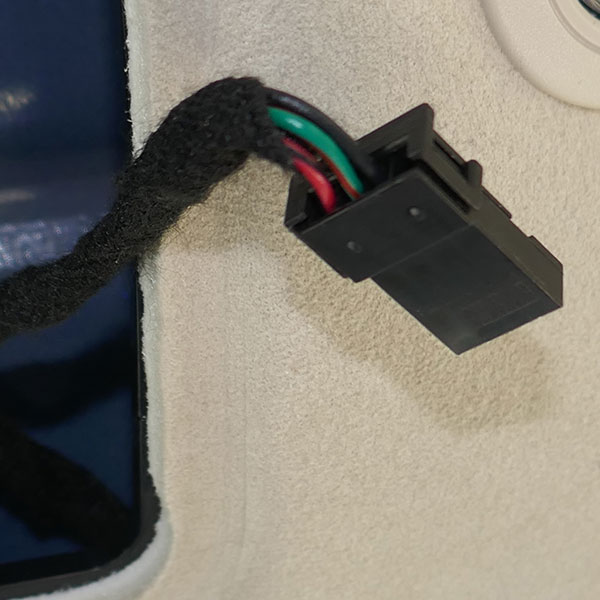 Enhanced Anti-theft optional alarm module helps to identify glass breakage and set off the alarm in the Model S.

Model S manufactured from 2012 to 2020:  the black 4-pin  connector is accessed after removing the microphone panel.  Video 2 shows in detail.  In a few vehicles (2014-2015?) the connector is taped up inside the headliner wire bundle and may be harder to locate.  The connector is available even if the intrusion module is not installed. Pin 1 = 12v, Pin 3 (black wire) = Ground. Our dashcam cable article explains more so you can make your own connections. 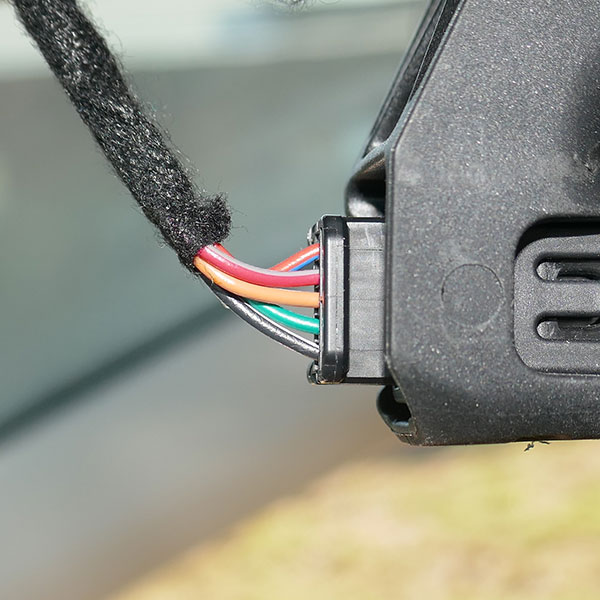 The rearview mirror has power and data to control the automatic dimming.  Mirror power is not available on the 3/Y and new 2021+ LR/Plaid. 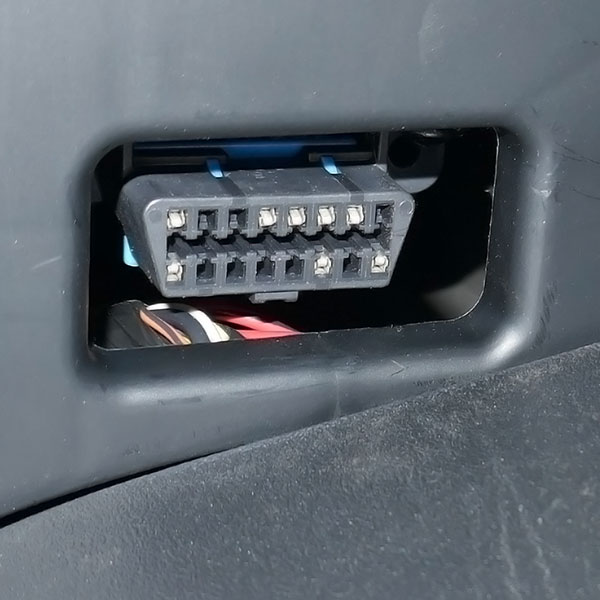 OBD-II (On-Board-Diagnostics) connector is required for environmental checks in ICE cars.  The Model 3 and Model Y do not have an OBD-II connection. 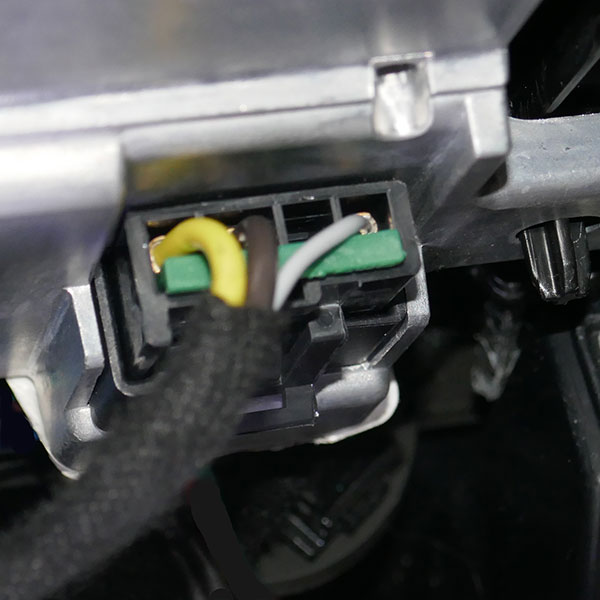 The inductive phone charger is a higher power connection, that can charge two phones, each at 15W or so.  We’ve tested this to 2 amps with no phones charging.  See our Power Tap project which includes a video to access this connector. 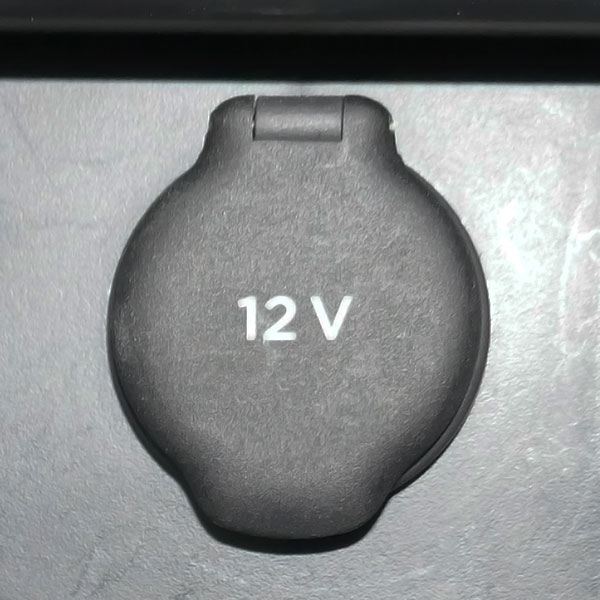 Commonly called the cigarette lighter socket, the power socket is the standard for 12v power in all vehicles.

Model S/X/3/Y:  Located in the center console.
Model X/Y: An additional Power socket is located on the driver’s side in the rear trunk area. 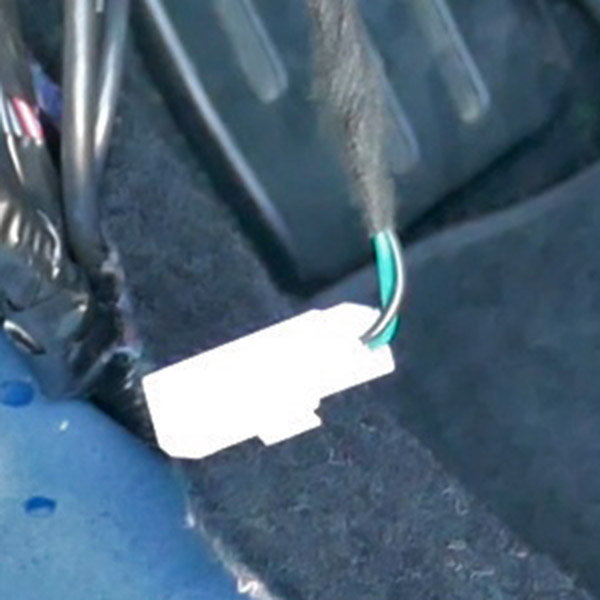 Model S Made from Sep-2015 to Dec-2020: This 4-slot white connector offers 12v power only while the related front door is open. It is not connected to anything. You must remove the sill to gain access. See video 2 for details. Only two wires are loaded into the connector.  The green wire = 12v, the black wire = Ground. 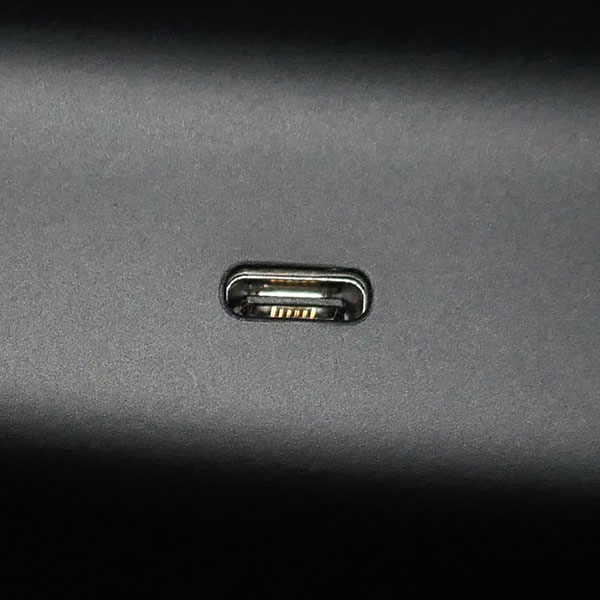 Each USB port offers a 5v connection. Older vehicles use only 2 USB-A ports. Newer ones use a mix of USB-A and USB-C ports. The newest vehicles include a USB-A port in the lockable glovebox, along with 2 in the front center console, and 2 at the rear center console.  The Model X includes another USB charging port for the 3rd row. 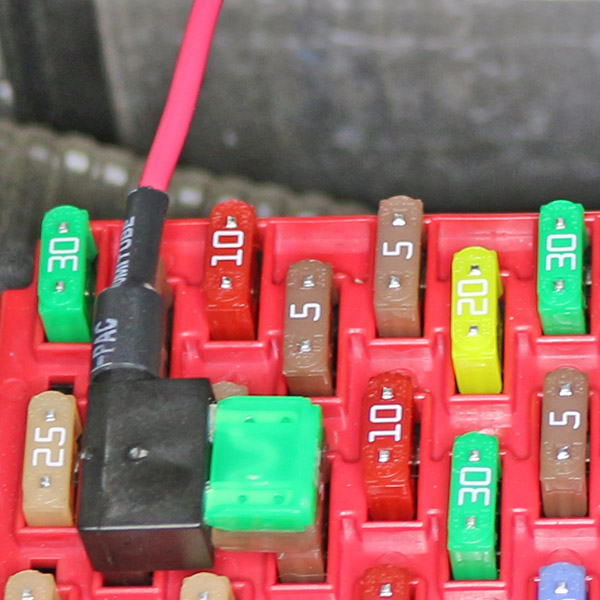 Some owners tap into a fusebox on an older S/X, manufactured prior to 2021.   Add-a-Fuse products allow a wiretap into a fuse box.  Check out our Fuses and Current Protection article for the location of fuse boxes and the functions. An empty fuse slot may work as well, but you’ll have to check if it is a switched or unswitched slot. To maintain proper circuit protection, never replace the fuse with a higher amperage fuse. Be careful with the Add-a-fuse orientation. In one direction, your tapped wire is fused, and in the opposite direction, it is not fused at all! 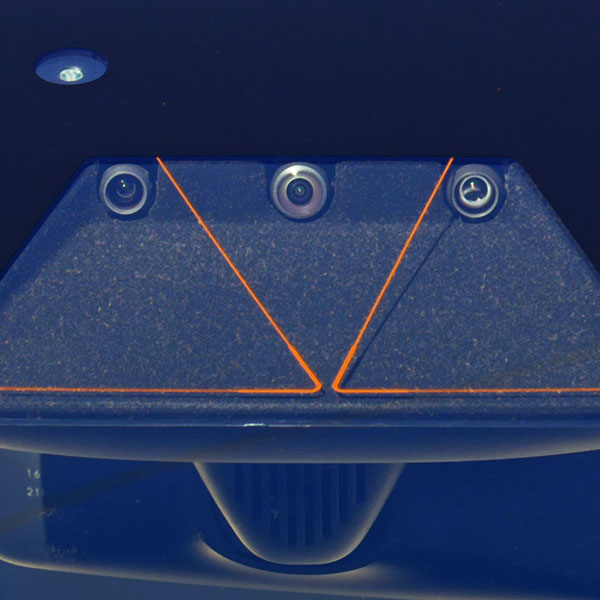 Reportedly, switched power is available inside the center-upper camera housing. We’ve been unsuccessful at opening this up. It requires quite a bit of pressure to remove the mirror and camera housing. It exceeded our personal threshold for possible damage. We know some owners have succeeded and one broke the windshield getting into this area.

Model S/X with cameras, Model 3/Y: If you get access, the white connector with a black and green wire should offer switched power.  The green wire = 12v, the black wire = Ground. 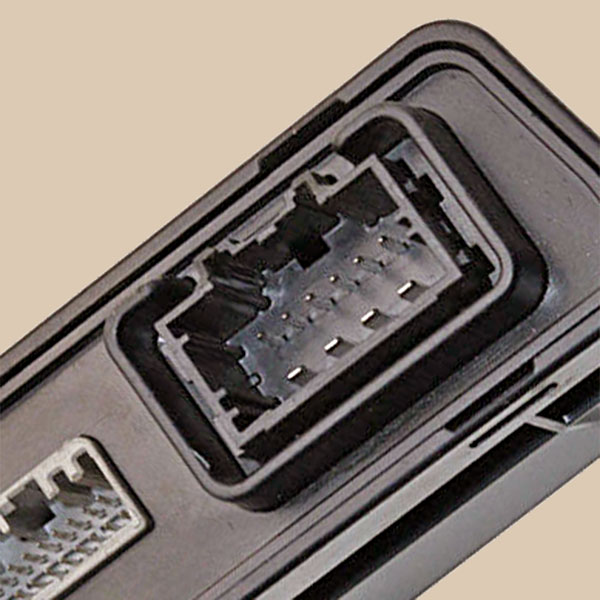 Model S 2012-2020: The liftgate module is located in the trunk, passenger side, near the Subwoofer. You’ll have to remove the side carpet to get access. At the module,  the red.gray wire Pin 8 = 12v, the black wire Pin 7 = Ground.

Model X 2015-2020: The rear body control module is located under the trunk floor carpet behind the rear wall trim.  While this module is powered, we have not confirmed if switched or unswitched.  At the module the white 16-pin connector, the red wire Pin 16 = 12v, the black wire Pins 11 & 16 = Ground.

There are many connectors without power, but we list several that you may expect to have power, but do not! 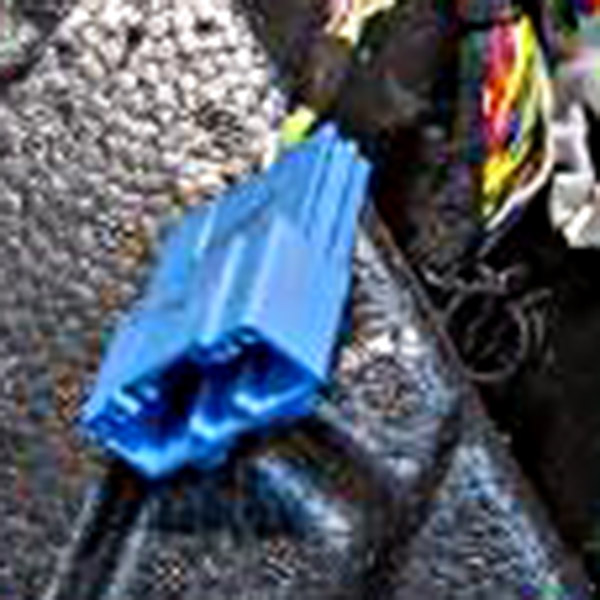 The Model Y (all) and the Model 3 (after 5-Oct-2020) have a blue CAN bus connector on the right side of the passenger footwell, behind the carpet.  While this looks the same as the powered Model S/X diagnostics connector, there is no power available on this connector.  (This is reported from other owners, as we have not verified this ourselves). 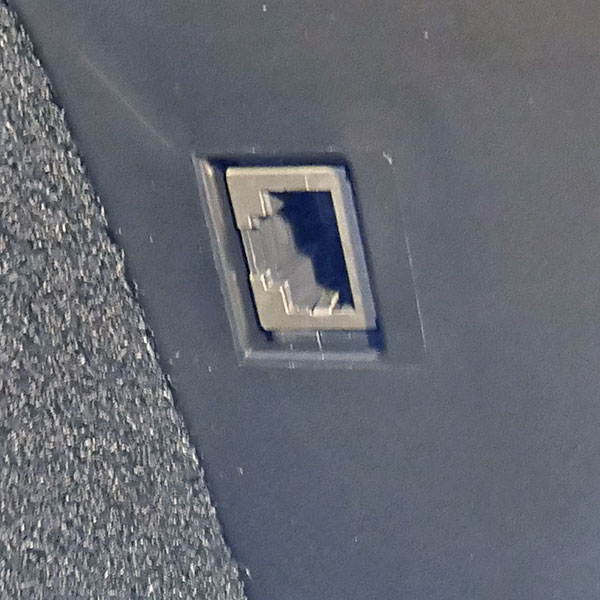 The Model Y and the Model 3 have an 8-pin RJ45 Ethernet connector under the dash in the driver’s footwell. There is no power available on this connector. 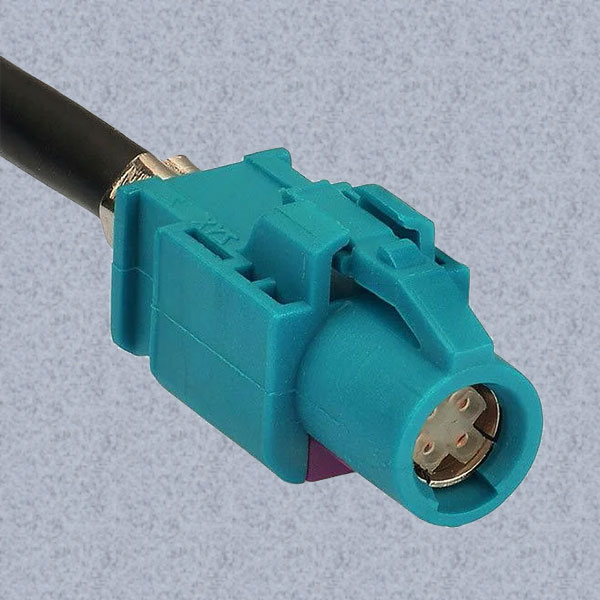 The Model S and the Model X have a 4-pin Fakra Ethernet connector above the center console. There is no power available on this connector. 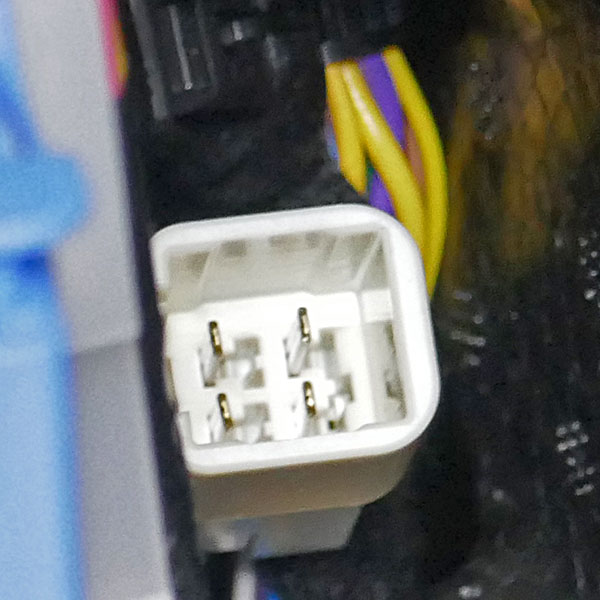 The Model Y and the X has a 4-pin open connector behind the carpet on the side of the driver’s footwell. Unconfirmed, the Model S and 3 may also have this connector. We were unable to detect any power at this connector, although power may occur when a trailer is connected or software enables trailer operation. Our tests were on a 2022 Model Y without a trailer hitch. Tesla sells a mating connector with wire pigtails, part number 1072586-00-A.

We made several videos that show where we connected up, the voltages encountered, and some of the state changes.  We did further tests not shown in the videos and recorded all the results in the prior Power States section.

There are a number of ways to wire into your Tesla. Here is our opinion on the best and worst ways to make your connections!

This category covers those locations that require no removal of any panels and is generally recommended by Tesla for accessories. This includes the USB ports, the power sockets, and the ODB-II connector (only on  S/X).

Tap into the back of a connector or use some type of wiretap.  Using connector pins, crimped and soldered to wires, these pins are then inserted into the back of a connector.  Surprisingly, they work fairly well for low currents on smaller connectors. Use tie wraps on the cable to keep the pins from being pulled out. You can also tap directly into a wire using various wiretaps. These puncture the wire to make the connection.  Look for Poi-tap or T-tap connectors.

Cut the desired wire and solder/tape the joint, or cut and use a wire nut to connect your power.  Both of these techniques can work, but are not reversible and are likely to fail over time with the harsh automotive environment.

This is one of those projects that seemed trivial to start and got more complex as we went along.  We could have just used a simple voltmeter, but with all the tests needed, we knew it would be easier with a group of voltmeters that could be viewed at the same time while recording the state changes when each vehicle is shutdown.

We designed and made a 3D enclosure and translucent lid to hold  3 voltmeters and associated rear connectors.

Into the cases, we installed voltmeters and connectors. The voltmeters are powered by the voltage under test, which is a bit odd but works for our needs here.  Self-powered voltmeters eliminate the need for a separate power supply and ground loop risks.  These voltmeters have an accuracy of +/-5%, but we were able to recalibrate them to better than +/- 2% accuracy.

The bump on the top held a tripod mounting nut, but we ended up not using it. We made three of these. Each case interlocks to the next case.

We bought and made a number of cables used to connect into different parts of the vehicle.

To measure the current handling abilities of the USB ports, we have a handy meter with a two-level resistive current load.

For measuring each 12v connection’s current, we used one or two 15-ohms 10 W resistors along with a current meter.  The resistor gets hot very quickly, so we had to limit each test to about 35 seconds. While it may be possible to pull more current, most 12v accessories require less than 1 amp that doesn’t use the Power Socket connection. 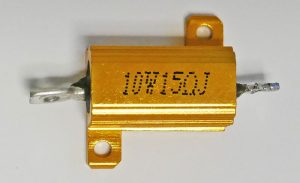