This project makes a professional 12V always-on power tap for your dashcam that connects to the Tesla Model S intrusion module connector. For the 2021+ Model S LR/Plaid, which no longer has accessible headliner power, see our Power Tap alternative.
We include a few notes on the Model X, but this project will not work as written in the Model X. (Apr-2022 update)

There are many ways to make this connection, so this is just one way it can be done. The connectors we use match the Tesla connectors and are polarized so they can’t be inserted incorrectly.  We added a T tap in the cable, which is used to power your dashcam. The design allows for easy installation or removal without any effects on your car (i.e. no car wires are cut or modified). Assembly takes about 30 minutes. Model S LR/Plaid vehicles manufactured in June 2021 and later do not have the connectors so see our Power Tap for those vehicles. 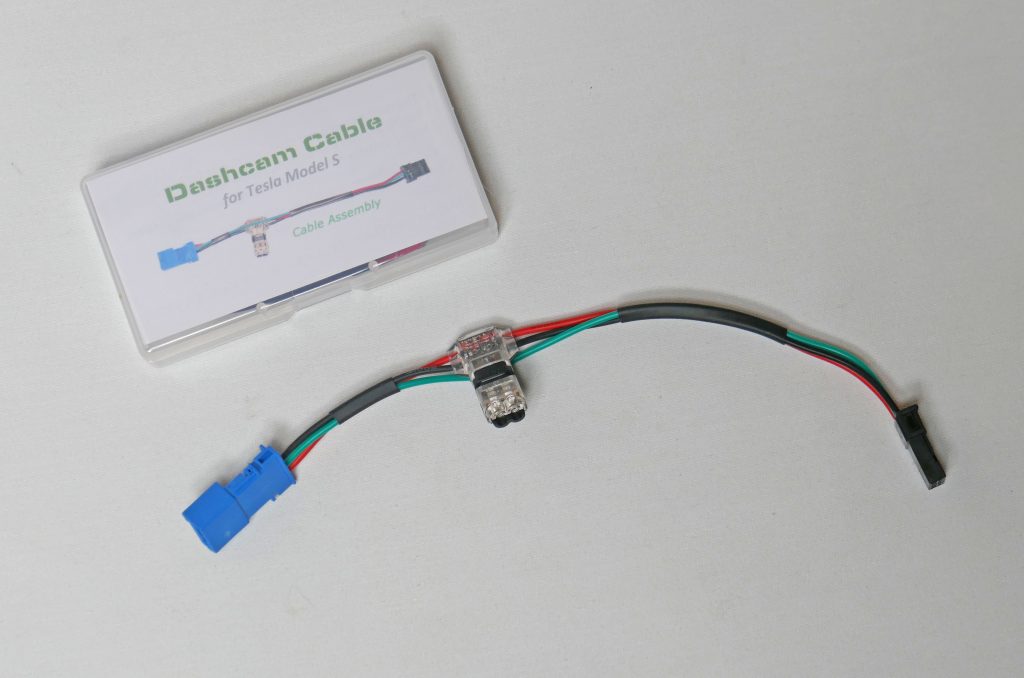 While this project is for the Model S, we believe all Model X vehicles include the intrusion module. It is a different design with a different 8-pin connector (but only 3 wires are used). On the Model X, the module is located next to the center dome lights The pinout is shown in the next section.

The always-on power source is in the headliner, behind the microphone panel. To open this panel, pull down using your fingers, at the back edge. Two snaps will release and it will hinge down an inch or so, where you can then slide it towards the back of the car to release.

There should be a 4-pin, 3-wire black connector taped to the panel, or if your car has the intrusion module, the connector will be attached to that module. 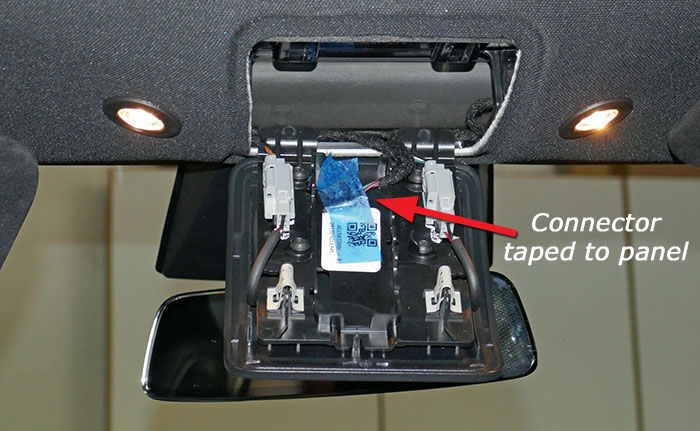 Connector attached to the panel with blue tape (yes this is a different car!) 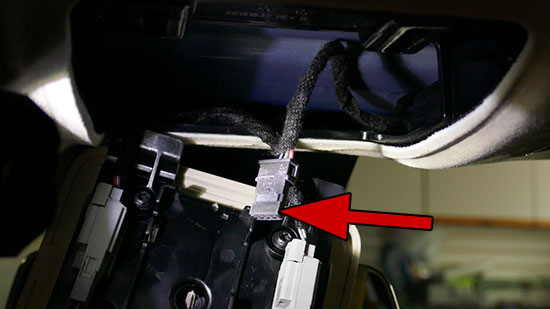 The 4-pin intrusion connector is black and has three wires. Don’t confuse this with the two gray microphone connectors. These do not have any power.

All Model S cars made after September 16, 2015, will have always-on power, and cars from 2012 through late 2013 also include always-on power as do all European cars.  Non-European cars made in 2014 and 2015 may not have the connector, or it may be tapped up with the large wire bundle in the headliner and hard to extract.

Connector Pinout for S and X

Pin 2: LIN bus (do not use this wire), wire color: Light Green/Red

For each wire end, strip about 3/32″ or 2mm of insulation from the wire. We then tinned the wire with a small amount of solder.

Using the crimp tool attach the male terminals to the end of each wire.

Even though the wire is crimped, it’s not all that secure. We elected to add a tiny bit of solder to each terminal and pin where the bare part of the wire is crimped. Add just enough solder so the solder flows and the tinned wire solder melts. If you add too much solder, the terminal or pin will not fit the connector!

Attached the male pins into the blue housing in the order shown – Red at the top, green next, and black last. The 4th position on the connector is unused. The pins only go in one orientation and should click when fully inserted. If necessary, use a tiny screwdriver to push a terminal into the clicked position.

Check carefully that each pin is fully inserted, then push down on the locking part of the housing.

Cut 1/2″ or 1.2mm of heat shrink tubing and thread it on the three wires.  Thread the remaining shrink tubing onto the wires. Do NOT shrink the tubing yet.

Using the crimp tool attach the female terminals to the end of each wire and solder.

Insert the three female terminals into the black connector housing in the order from the top, red, green, and black. Again the last position is not used. Each terminal should click into place. If necessary, use a tiny screwdriver to push a terminal into the clicked position.

With all the terminals fully inserted, on the black housing, close the locking tab.

Open the T connector and thread the red and black wires through the connector. Place the red wire in the top slot and black on the bottom slot. Move the T connector so it is closer to the blue connector, so there is about 1.5″ or 4 cm of wire between the two. Use pliers to clamp the clear and black portion of the T connector together until it clicks.

The bottom of the “T” will be used to connect power to your dashcam. Check that it is not already closed. If closed, you’ll need to pry it open by releasing the two side tabs (not so easy).

Using a heat gun, shrink the heat shrink tubing. Your completed assembly should look like this:

Your dashcam hard wiring power cable should end in a red and black wire, and include an in-line fuse. For our installation, we used the wires from a BlackVue hardwiring cable (for most models from DR430 to DR900). This kit has a 15-foot power cable, which is too much wire to stuff into the headliner, so I cut it to length. Be sure to re-attach the in-line fuse. It’s best to do this work before the dashcam wiring is installed as described in our dashcam installation guide.

Insert the dashcam’s red and black wires into the two holes in the transparent portion of the “T” connector. In the cable view above the red is on the left and black on the right. The next images should help get this right. Make sure they are fully inserted and clamp the T connector together using pliers.

Connect your blue connector to the Tesla black connector. 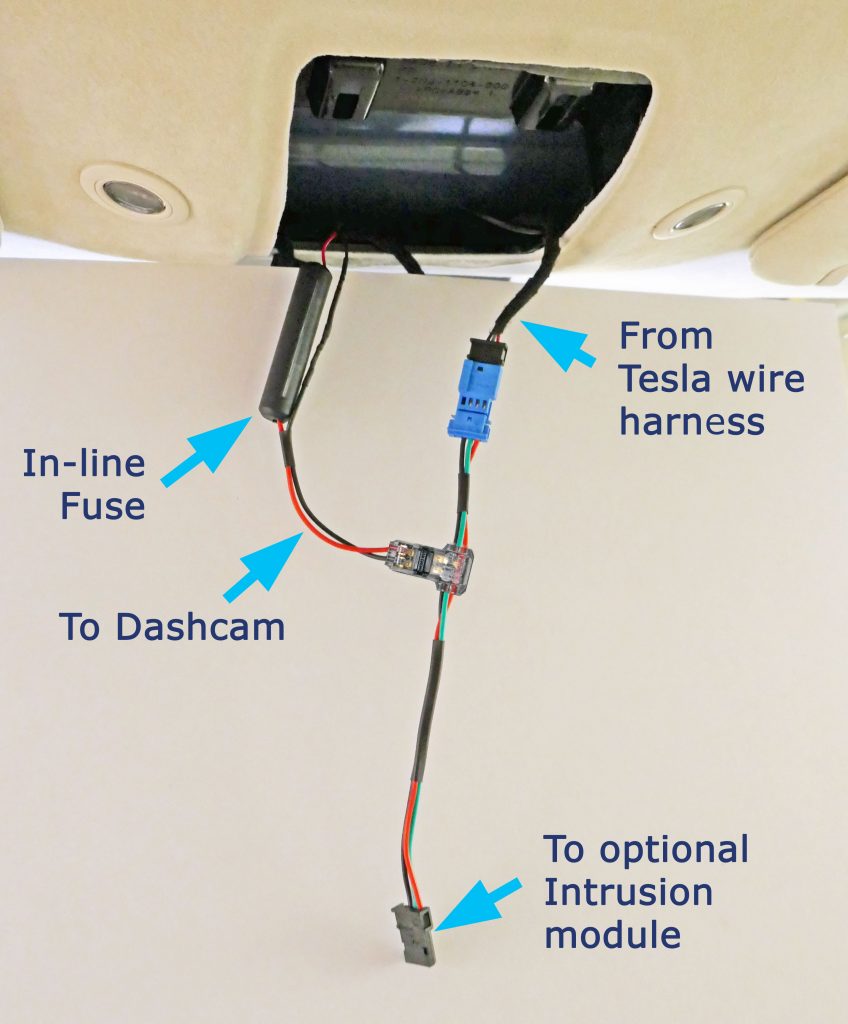 Cable in the car

In the view above, we placed white cardboard between the microphone cover and the assembly to make it easier to see the wires.

If your dashcam includes a third yellow wire, the wire is a second power wire which is provided for ICE cars where the dashcam would quickly drain the battery.  For an EV, you can keep your dashcam powered all the time without any concern. The power drain is trivial compared with the EV’s total power. If there were no other loads, even a small EV battery would power the dashcam for years.  Use the optional T21 connector (gray in the image) to combine the red and yellow wires together. 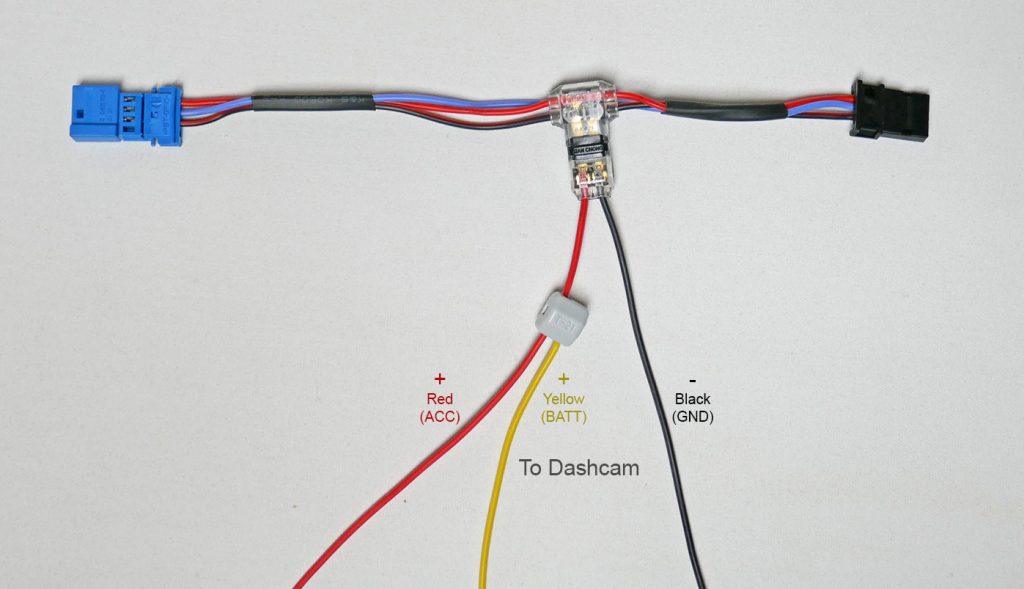 Connections for a 3-wire Dashcam

Test that your dashcam is getting power.

Close up the microphone panel by sliding the front in first, and then pushing up until it clicks into place.

If you have the intrusion module, it is smart to test it as well. To do this, roll down a window in an area that is not too loud. Lock the car and wait about a minute with the key held 50 feet away or so. This arms the intrusion module. Without bringing the key back in range, insert your hands into the car and clap your hands loudly together. The alarm should sound. Use the FOB to unlock and silence the alarm.