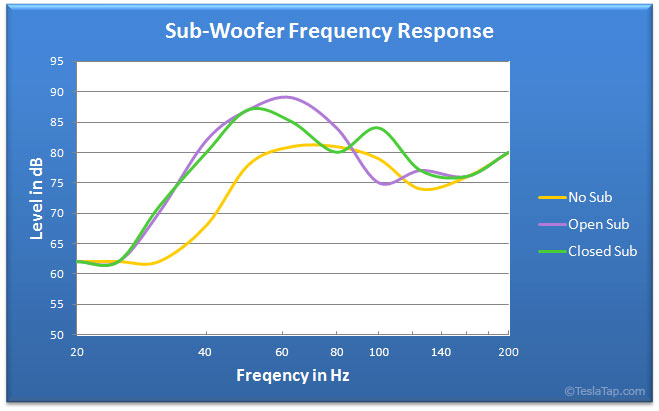 The chart compares the frequency response without powering the sub-woofer, the sub-woofer open (i.e. no well lid, carpet rolled up, parcel shelf folded open), and then with everything closed in the trunk as it would normally be. For the tests, the car’s liftgate was closed and all the doors and windows were closed. I sat in the driver’s seat. I do not have the panoramic roof, but suspect it would have little effect if I did. This car has a basic sound system. Tesla’s audio tone controls all set to zero and the fader set to full front center (no rear speakers). The audio was monitored in the center of the car at the top-front of the armrests.

Not shown in the frequency response are some audible resonances at high volume levels when using a frequency sweep.  I rarely notice the resonances with actual music tracks at loud levels, but a better sub-woofer or sub installation may reduce these resonances. I expect the NVX sub-woofer would avoid some of these resonances and would sound better, but I haven’t yet had a chance to compare them.

What I’d do differently
I likely would have purchased the NVX speaker that is designed specifically for the Model S. I like how it mounts and uses less space than that taken up in the trunk well with the speaker I used.

While really minor, I would have routed the speaker wires along the driver’s side to avoid having to go across the dash. The way I did it only required less than 5 minutes of work – so either side will work.

I’m considering a speaker grill to better protect the speaker cone. I did buy a generic 10″ cover, but it did not fit properly.  A 12″ cover may be a better bet.

Update: After a week, the level control fell off (it was attached by Velcro). Looks like either the placement and/or adhesive will not work. I may have to drill a couple of small holes in that plastic panel and use a tie wrap to hold it in place or a larger hole and have it face downwards. It could be attached with epoxy as a third alternative. I also tested the vampire drain of the amplifier when off. I’m happy to report it’s less than 1 ma, a truly insignificant amount.

Conclusions
The audio clearly sounds better with a full deep range that you hear parts of music that I never heard in the car before. A regular passenger when heard it for the first time commented “This is 100% better”, and she’s a drummer!  Now, this seems a bit extreme, as that might imply it was dead before, but I can agree it is better and worth the effort.

Return to Part 4: Testing and Adjustments