Before installing the amp in its final spot, it was relatively easy to test, adjust and confirm proper operation with the amp sitting on the floor.  Keep the amp’s plastic terminal block cover removed so you can see the status LEDs 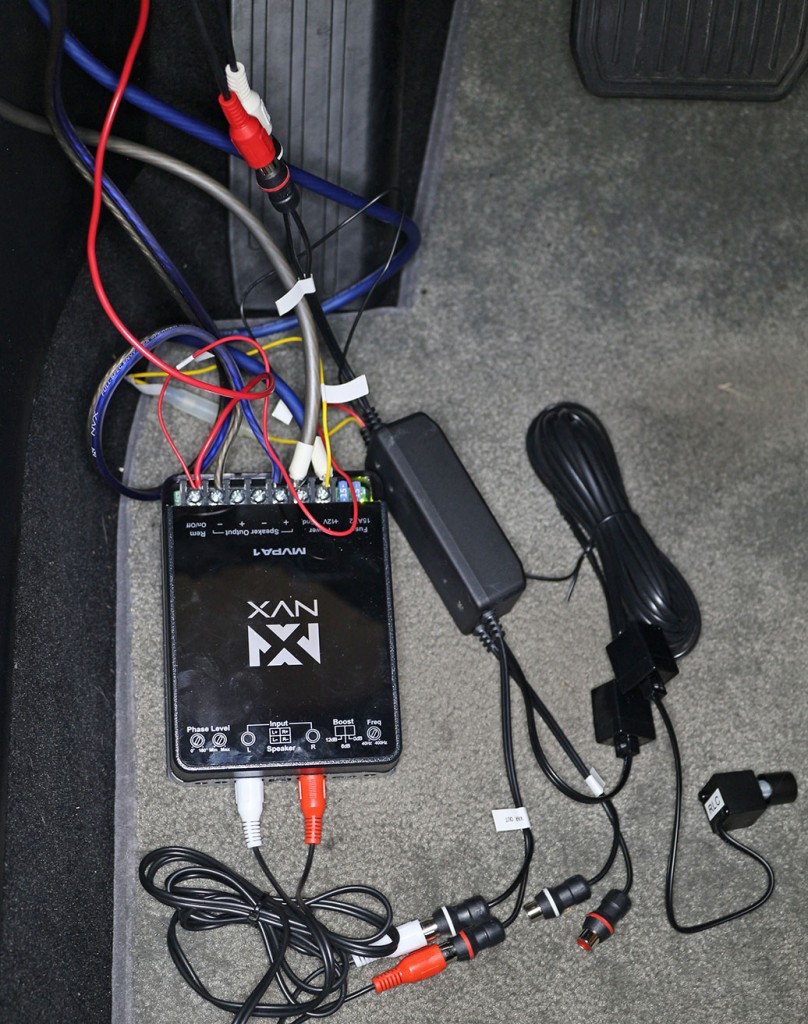 For testing and making adjustments, ideally, you’ll need audio test sounds. I used recorded sounds from the Alan Parsons Professional Audio Test CD.  This disk has many sound test tracks that are ideal for setting up the system.  Unfortunately, it appears this CD is out of print, although I’m sure there are others available that will work. Precision Test Signals CD on Amazon that appears to have most of the needed tests. The audio tracks you’ll need include:

You’ll need to transfer the needed sounds or the entire test CD to a USB stick. I strongly recommend you use a lossless format such as WAV, FLAC or AIFF.  We really don’t care about the space used by the files as it is only for testing. You can simply copy the files from the CD to your USB stick using a PC or Mac – there is no need to convert them.

If you don’t have audio test sounds, it’s still possible to get a rough adjustment using just a music track with heavy bass. With an external level control, you can also tweak the level later on.

If you’re using a speaker in the trunk well, close up the well as you expect it to be when the project is complete. Close the liftgate, all windows, doors, and the sunroof.

If using a wired remote level control, set the control to the center position. Set the Tesla volume level to 8. On the Tesla audio screen, open the Tone screen and set all the settings to the center zero mark.  On the Fade/Balance screen, shift the levels to the center front (no rear speaker volume).

Setting the tone and balance

Depending on the amplifier, there are various adjustments. On the NVPA1 amp, we set the phase to 0 degrees, level to Min, Boost to 0 dB, and center the Frequency cutoff control.

With the car audio first turned on (i.e. you’re in the driver’s seat), the NVX amplifier will show a red LED next to the switched power lead. After about five seconds, this LED goes out, and a green LED appears next to the always-on power side.  If this doesn’t occur, you may have a wiring error or one of the power leads is not providing 12v. Check the voltage and ground with a meter to identify which line might be at fault.  For always-on power, you might confirm you connected the add-a-fuse to the right fuse location.  For switched power with a basic audio system, it is possible that Tesla did not include the F8 fuse for this circuit, although it was present in my car. Unfortunately, fuse box 1 is very hard to get to where F8 resides.

If using the JL line converter, a green LED on the top of the box should be illuminated.  If not, check that the yellow lead is connected to always-on power, the red lead to switched power, and the black ground wire is connected to the ground.

Now we’ll test that the audio paths are working. Play a 50 Hz test signal (or music with known very low bass).  On the amp, adjust the level control to a point where you can confirm the sub-woofer is getting the audio signal.  If you are not getting a signal, you need to figure out where the signal may be blocked or failing. Never leave the amp’s level control at maximum to avoid blowing the speaker and your eardrums when you suddenly fix it!  Some of the things to check for:

The Ultra High Fidelity sound system’s Sub-woofer line out provides the best source for your sub-woofer amp.  On basic systems, the left/right line-level and speaker outputs have an electrical peak at 100 Hz and drop off as you go to lower frequencies. There is almost no audio below 30 Hz. This is a good design by Tesla to not overload the existing speakers at frequencies they can’t handle but leaves us without a perfect source on basic sound systems for the sub-woofer. Still, quite a bit of low-end bass is available to significantly improve the overall sound.

If you have no audio test tones available and want a really rough way to set the controls, the following provides a guideline. The positions are with the base of the amplifier down (i.e. the mid-point of the control will be pointing to 12 o’clock.

With the adjustments complete, we can install the amp and wrap up the car!

Continued in Part 5: Results and Conclusions…

or return to Part 3: Amplifier Installation