Tesla does not currently offer CarPlay. We delve into what it is, what it might provide and issues that may slow or prevent implementation. Tesla has never stated if CarPlay will be available in the future and none of this article is based on any internal knowledge of Tesla’s plans.  Google’s Android Auto is a similar system for Android devices is covered in a similar article. (updated Oct-2019)

Apple’s CarPlay was launched in March 2014 and is available on one car in late 2014 and a few more in 2015. Today a number of cars have CarPlay when a display option is offered. The design allows car-specific apps to appear on the car’s infotainment screen, with touch operations passed back to the phone.  CarPlay works through a proprietary Lightning connector. In the future, CarPlay may work over WiFi as well.  Only iPhone 5 variants and later are supported with CarPlay.

Generally, CarPlay takes over the entire screen in landscape mode on small-screen cars. We presume that Tesla would provide an icon and pane for CarPlay. This is a mockup on how it may look. Tesla is not likely to get control of icon styles, text style or sizing other than a frame to display CarPlay. 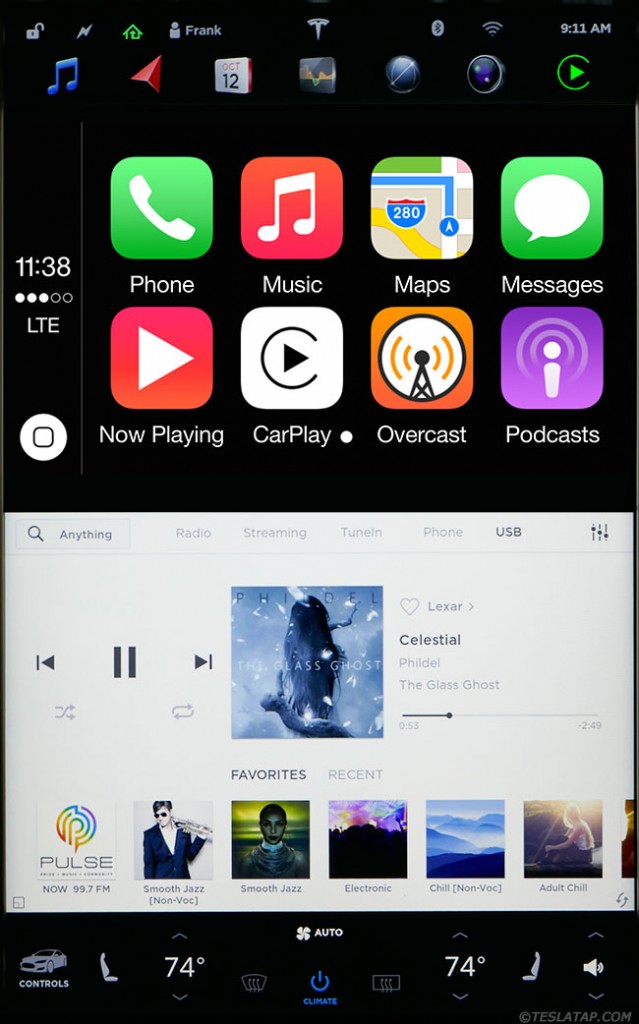 Currently, the iPhone can be controlled by Tesla’s vehicles over Bluetooth for phone calls, contacts, calendar, and music. Siri can also be used today with the iPhone’s own microphone.

Apple’s MirrorLink replicates the phone on the infotainment screen providing full access to the phone’s entire set of applications (not a limited CarPlay set). Tesla has stated some mirroring capability may be coming to the software.  Some Apple owners seem to feel this is an inadequate solution and would prefer to be limited to CarPlay applications. Until we see Tesla’s implementation, it is unclear if this will be better or worse than CarPlay.

Some users also add an iPhone dash mount, so they have full iPhone access today. While functional, it is not as nice as an integrated solution and uses the main Tesla screen.

Some automakers include CarPlay for free when the premium display/navigation is purchased. Others charge an extra fee. For example, BMW charges $300 on the select vehicles that have a CarPlay option.

Most, sure. But all?

Your article is written from the perspective of someone who hasn’t used this system. It essentially makes it easy to deal with things from your phone hands free and with a ui/ux you already know.

Your anti spam thing is awful btw. Would be easier if it just asked for the stock ticker.

Thanks for your input. I’ve used CarPlay, but the article attempts to address both the pros and cons of CarPlay and possible reasons why Tesla has not implemented it.

Not sure when this was posted since oddly there is no date on the post but every car manufacturer you list as not having announced CarPlay already has CarPlay in their latest vechicles except Tesla. Infiniti has announced but not available yet. So it appears every other brand has not seen a challenge with any of the issues noted above. The one relevant issue you mention however is presumably the real reason which is Apple may become a competitor so they don’t want customers to prefer Apple CarPlay and possibly end up switching to an Apple Car someday and since if people use CarPlay they won’t be using Tesla’s maps thus Tesla maps won’t get better as quickly. I think they will someday have to offer support but they will likely hold out as long as possible.

We posted this in 2017 and there has been a lot of talk about CarPlay over the last few years. I haven’t gone back and verified which automakers support or don’t support it, but considering how awful most car’s infotainment systems are, it makes sense for those carmakers to jump on the CarPlay bandwagon and avoid having to improve an otherwise crummy system.

Sorry to say, there no way to mirror any phone screen in the Tesla. Seems like this idea was dropped, but who knows – Tesla could introduce something like it in the future.