Tesla does not currently offer Android Auto. We delve into what it is, what it might provide and issues that may slow or prevent implementation. Tesla has never stated if Android Auto will be available in the future and none of this article is based on any internal knowledge of Tesla’s plans.  CarPlay, a similar system for Apple devices is covered in another article. (updates Oct-2019)

Google’s Android Auto was launched in March 2014 and is available on one Hyundai car in 2015, and a few more in 2016, and quite a few more today. The design allows car-specific apps to appear on the car’s infotainment screen, with touch operations passed back to the phone.  Android Auto works through a standard USB connector. Only devices with Android 5.0 or later are supported with Android Auto.

Generally, Android Auto takes over the entire screen in landscape mode on small-screen cars. We presume that Tesla would provide an icon and pane for Android Auto. This is a mockup on how it may look. Perhaps Tesla can modify icon styles, text style and sizing to be consistent with the rest of the UI. 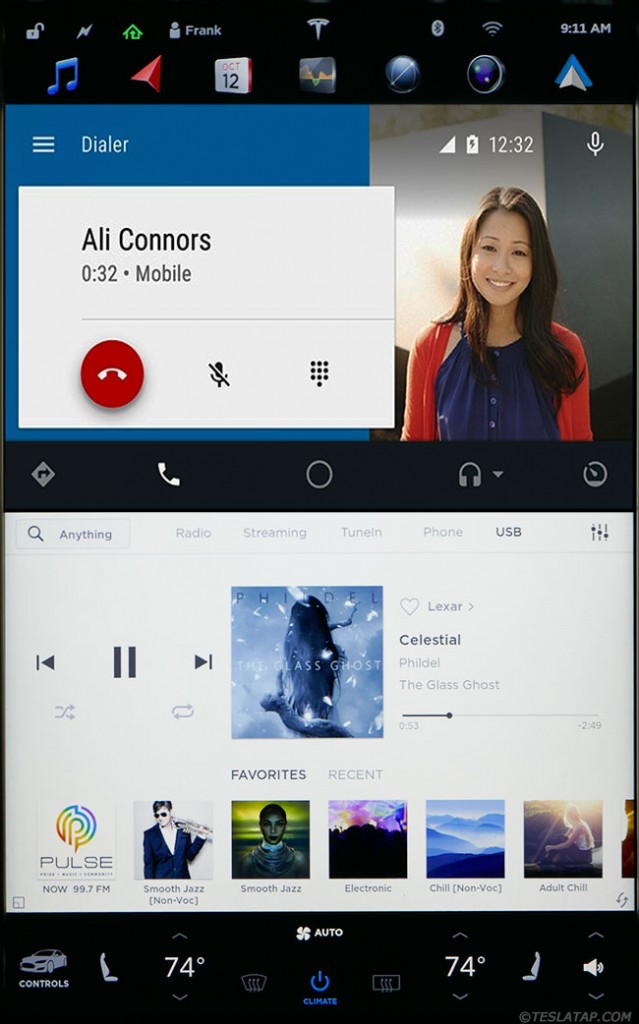 Currently, Android-based devices can be controlled by Tesla’s vehicles over Bluetooth for phone calls, contacts, calendar, and music.

MirrorLink replicates the phone on the infotainment screen providing full access to the phone’s entire set of applications (not a limited Android Auto set). Tesla has stated some mirroring capability may be coming to the software. Until we see Tesla’s implementation, it is unclear if this will be better or worse than Android Auto.

Some automakers include Android Auto for free when the premium display/navigation is purchased. Others charge an extra fee. For example, BMW charges $300 on the select vehicles that have an Android Auto option.

Many major automakers are on-board with Android Auto, with many newer models with displays including Android Auto as a premium option.