A contactor is a large switch controlled by an electromagnet under software control. It connects the battery pack from connections outside the pack (to the motor inverter, chargers, etc.). There are two contactors in the Model S inside the battery pack – one for positive and one for the negative. This is a clever safety design because if one fails shorted, the software can still disconnect the battery from the outside.

Here’s an example of a contactor that is very similar in style and size to the ones used in the S85 battery pack. 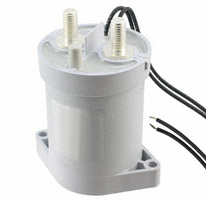 Ideally, for the longest life, the contactors should be switched when there is no current flowing through it. The Supercharger, AC/DC charger, DC/DC inverter, and motor inverter all are controlled by software, such that normally the contactors are not switched when power is flowing through them. It is designed to handle switching high-current and voltages, but this is not ideal.

A contactor may be on for hours while driving or charging, and if just powered by 12v can get hot and shorten its life. Tesla uses some additional electronics to supply 12v to engage the contactor, then reduce the power after than point, as less power is needed to keep the contactor engaged. This reduces how hot the contactor gets, also extending its life.

The primary contactors are mounted inside the pack itself, again for safety reasons. It’s located at the end of the battery towards the back of the car. This is adjacent to the external power connection. There are additional contactors external to the battery for switching between DC and AC charging.

There have been a few reports of a contactor failing. If failed in the open position, then the car cannot be driven or charged. If shorted, it may be possible to drive the car, but likely Tesla’s software detects this condition and will not let the car charge or drive as half of this critical safety system has failed.  A shorted condition occurs when the contacts weld shut. It may not be detectable until software releases the contactor and detects it didn’t release.

Some of the messages that may appear after a contactor failure occurs:

We do not know the reason for the failures. It may be a batch of contactors was manufactured poorly. Defects may be very hard to detect until real-world usage. The plating on the contacts might be too thin or the spring has the wrong tension. It could even be a software bug on some older software version that disconnected the contactor at the wrong point too often.

Just like the many other parts that fail (in any brand car), I don’t expect we will ever hear what the exact issue was. The fact Tesla tells us the part failed and/or is being replaced before it fails is better than most car companies.

In the last few years, contactor failures appear quite rare.

Here’s a video (23 minutes) of an owner replacing the two contactors in an older battery pack. It’s far from an easy or simple process, and since you’re dealing with lethal voltages, so I wouldn’t recommend trying this!  Just getting the 1000 lb battery pack out of the car is quite a task by itself.

Tesla sources this part from multiple vendors, so other parts may be used in different cars made at different times.  While I’ve been unable to get the exact specifications on this part, a similar TE contactor that handles 500 amps up to 900 VDC costs $120 each in single quantities.

The new Ludicrous option upgrades the contactor to a new design. This contactor uses Inconel, a high-temperature superalloy, instead of steel to work with very high currents that produce a lot of heat.

[…] our friends at TeslaTap, current flowing from the battery passes through a contactor which is a large switch controlled […]