To Catch A Thief – Tesla Breakins

In some areas, such as the Bay Area, California, there has been a rash of break-ins, especially premium and luxury cars.  I had my Tesla Model S broken into this week and thought it would be worth it to show you what happened with dashcam footage, helping the police to catch the thief, creating a temporary window repair, and some ideas on how to reduce being a target.  (Feb-2021 update)

I was out with friends at lunch at Tomatina, at the Mercardo in Santa Clara. Lunch was about an hour, and we returned to my car. One of my guests wanted to go shopping nearby, so we spent about 20 minutes looking around the store, and we bought a $20 footstool. I took it back to the car and put it into my trunk and returned to the store to wait for my friends to complete their shopping.

Meanwhile, in the parking lot, the thief backs in one slot over from the front of my car. He’s driving a light blue Infinity. A car in front of me pulls out and the thief gets to work. He slinks out of his car, breaks my rear corner window and reaches in, and opens the rear seat to look into the trunk.

I had security mode active, but if it did anything, it didn’t deter the thief. Since no door was opened, the alarm did not go off.  Unlike 99% of the time when my trunk is empty, I happen to have it stuffed with friends’ golf clubs, a friend’s purse, and other items.

Here’s where I got somewhat lucky. A car pulled in directly in front of my car.  At this point, the thief was in full visibility to that driver. He then abandoned grabbing any loot, and returned to his car and drove off.

We returned to my car about 7 minutes from when I was last at the car and discovered the break-in. The shattered window left glass everywhere in the back of the car, which we partly cleaned up so we could drive home. 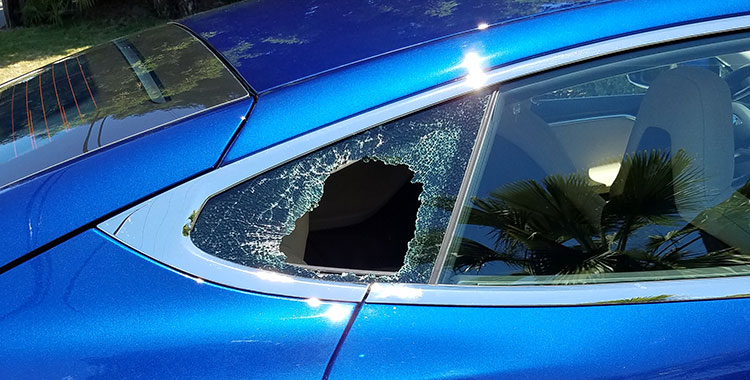 Yikes, my window is broken!

My car is an HW2.0, so there is no built-in Tesla dashcam. Three years ago, having caught a different thief with my dashcam breaking into a friend’s BMW that was parked in front of my Tesla – I’ve been a strong proponent of having a dashcam. I upgraded the dashcam in my current Tesla to a BlackVue DR900, one of the best you can buy. I have no relation to BlackVue, and there are plenty of other good choices. See our Dashcam Guide if you’re interested in a dashcam.

In reviewing the footage of the rear camera, I was able to know when I left the car and returned – 7 minutes and 34 seconds. Reviewing the front camera footage, I could see all the events unfold in those short 7 minutes.

The DR900 records in 4K video. When parked it has two options – motion capture video, or time-lapse, where it takes a photo every second. I found in the past motion capture records too much video and sometimes no recording when you wanted it. I had previously set the dashcam to use time-lapse mode.

Because the resolution is so high and it uses a very wide angle, I was able to get the thief’s car in enough detail to make out the license plate. If I had the Tesla dashcam, the narrow-angle front camera would not have even seen the car.  On the other hand, I have no images from the side of the car showing the actual break-in.  The Tesla dashcam would have captured the break-in. 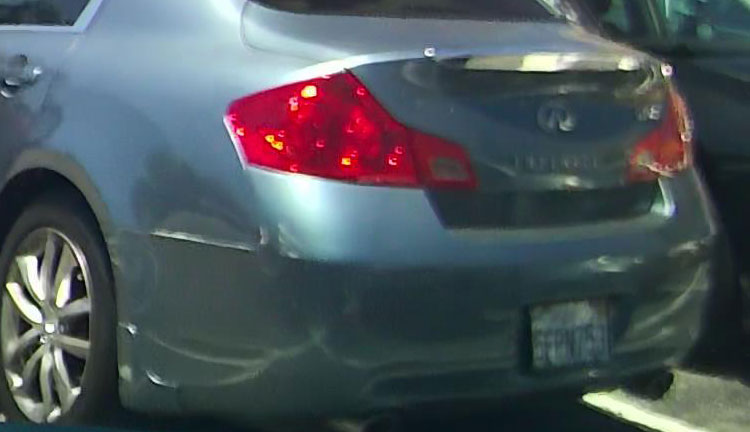 First I used Google’s image search with the term “Infiniti rear”. Looking at the images, I could tell it was either a G35 or G37.

Even with the high resolution, the license plate was hard to make out, but I thought it was 5FPN753.  Going online, I found the SearchQuery site that provides more details on license plates for free.

That seems to match. SeachQuery also offers a more detailed search suggesting they may provide the owner’s name.  For $17, I bit.  Well, a waste of money, as it only turned up the VIN JNKCV51F04M702248.  Not too useful.  Some states may provide more info from these search databases.

A friend who knows Infinity well pointed out the backup lights were different in 2004 4DR than the images shown, and it was changed in the 2004 coupe and 2005 4DR to the style seen in the thief’s car. It’s possible Infiniti changed the design mid-year, but that seems less likely.

I wanted to know the thief’s car color – a light blue. Again another Google search “Infiniti G35 2004 colors” brought up all the colors for that year. Infiniti calls its blue paint “Caribbean Blue Metallic”, but that is a much deeper blue. Looking over the used car market, the color of the thief’s car is “Lakeshore Slate Metallic”. I was unable to find any 2004 used car with that color, they seem to start in 2005 with that color.

So now I’m in doubt about the year, which makes the license plate suspect or the database is inaccurate.  It’s always possible it is a newer car, perhaps 2008, with a stolen license plate. The process I went through is still instructive in trying to gather more information.

Now should you find the actual owner through a database, it’s unknown if the thief owns the car or it was stolen. In addition, it seems risky to make yourself known to a thief. He could be part of a gang, and you don’t want that kind of trouble.

I filled a police report online, including photos and the license number. I doubt they can do anything, as nothing was actually stolen, and there are no images of the actual break-in. Still, I hope it puts the police onto this thief and may help if he’s involved in other break-ins. Another break-in video from a Tesla owner in our area helped police nab those thieves.

I contacted my insurance and they suggested one glass repair firm. The firm has a good reputation, and they had done Tesla glass repairs in the past. They had two options, I could have it replaced in 2 days where they would expedite getting the glass if I pay upfront (and then collect from the insurance), or wait a week for normal parts delivery and have the insurance directly pay.  I was going to go with option one when I found out the shop is 60 miles away, at least 1.5 hours driving each way (if not during rush hour). That was not a good choice for me.

Next, I thought – why not check the Tesla-owned body shop in San Jose?  While the first call was busy, then the next call got through to a specialist. Turns out they don’t do glass, but he recommended a local company, Primer Auto Glass that does Tesla glass repairs. Calling Primer, they could do it in 6 days, and more importantly, would come to my house and handle the insurance directly (other than the deductible). It couldn’t be easier.

First up was stabilizing the window. After knocking out any loose shards of glass, I used some clear packing tape on both sides of the Window to keep more shards from breaking free.  I vacuumed up the glass in the car with a shop vacuum. I knew I was going to need to use the car before the glass could be replaced, so wanted to seal it up.

My first attempt was to use cardboard on both sides and hold it in place with packing tape. That worked for a few miles, but ripped off at about 35 mph!  Ok, I have a little time on my hands and engineered a better solution using parts laying around in my garage. Yes, perhaps a bit crazy to create a cover that will only be used a week.  If you embark on this project, it can obviously be done differently depending on what materials you have on hand.

I made a template of the window on the non-damaged side, outside and inside (which are different sizes). I had a sheet of 1/16″ white polyethylene plastic and a 2 foot of aluminum stock that is 3/4″ wide by 1/8″ thick.  I cut out the two sides and the aluminum stock as shown in the photos. You could blow up the photos and use them as templates. 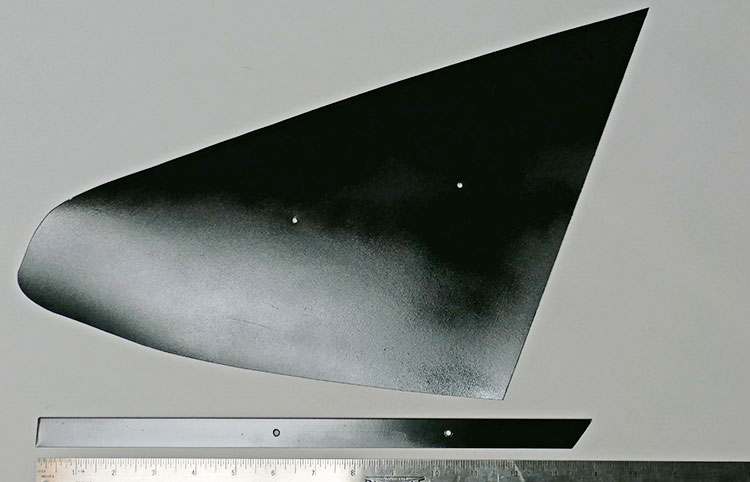 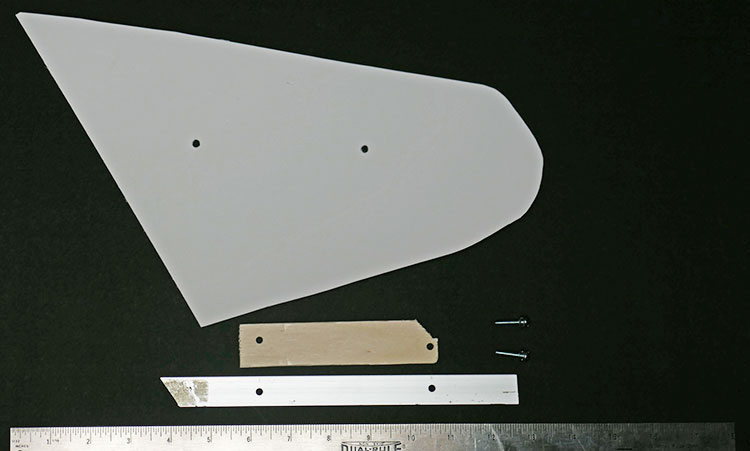 I drilled and tapped holes for two 3/4″ long 8/32 screws in the aluminum stock that is on the outside. I drilled matching larger holes in the other materials. I cut down a paint stick to using as a spacer in the open area of the glass. I also painted the outside parts black so it wouldn’t look so stark white!

Inside cover attached with a wood spacer

I attached the inside metal bar (not shown) behind the inside cover and the wood spacer. The screws can be seen poking through.

Outside cover and metal bar attached

The completed cover, where you can see the ends of the two screws. I used a black sharpie pen to black out the ends (not shown).

It’s worked fine on the freeway at 70 mph, so no more issues. It’s also a lot quieter than when it was open, but I still hear some wind noise. At first glance, people might not even notice it. I’ve avoiding parking it in the sun, as I suspect the black cover may get so hot as to deform, as the material is quite thin.

Avoid Being a Target

I thought I was being careful, parking in a busy parking lot, picking a slot in the center, and having Sentry mode.  Still, there is more one can do:

I expect Tesla will improve Sentry mode. It’s already a cool feature no other car has. I have the optional Tesla intrusion module, but for some unknown reason, Tesla disables it when Sentry mode is active. Tesla really should allow both to be on at the same time. In this case, if the intrusion module was active, the alarm would have gone off when the window was broken.

In the March-2021 refresh, the Model S has changed to an electric rear seat release that you access from the trunk. This is similar to the Model Y and makes it far harder for thieves to access the trunk from the cabin.

Some owners have talked about making the window stronger, perhaps made out of Lexan. While I doubt it would pass regulatory requirements or longevity, the main reason this will not work as it just shifts the thief to break larger windows. Replacing a side window or hatch window is going to be a lot more expensive!