I wanted a better place to store my sunglasses. Evannex used to carry a fairly good Glasses clip, but it has been discontinued. It holds well and clamps to the visor and supports any size of sunglasses. (Oct-2022 update) 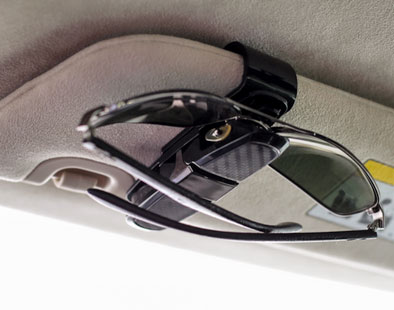 On the downside, it almost requires two hands to insert or remove sunglasses. My main annoyance is the black looks ugly in a vehicle with a cream interior. Still, it’s inexpensive and easy to buy and install. I expect most owners will be more than satisfied with it, and for $15, a relative bargain. I’m sure there are other generic glasses holders too, but none that are color matched.

Looking for the ultimate solution where time and money were not real considerations, I set out to make a better design using my 3D printer. I went through 6 versions, starting out with a clip to the visor. My first attempt dumped the glasses out when coming to an abrupt stop or should the passenger tilt the visor down – not very useful. I then added a friction latch to better held the glasses, but this orientation still had problems, as it blocked the visor from fully opening and still glasses slipped out some of the time. 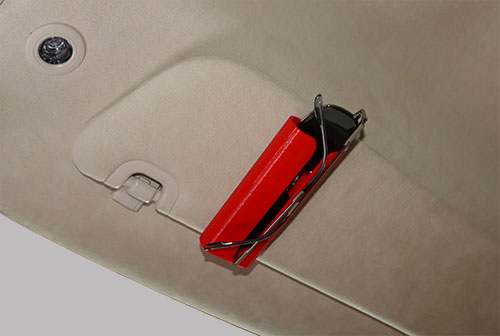 Changing the orientation fixed both these issues. 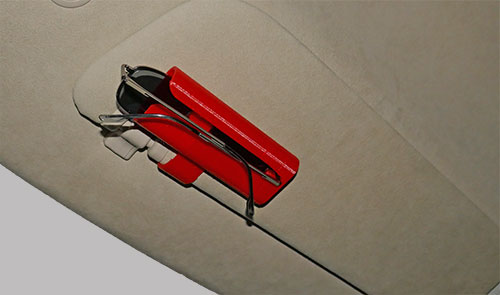 I still didn’t like the glasses on the visor. If the visor was down, the glasses are hard to access, and even when up, it is slightly annoying to passengers.  Ok, time for a relocation. I moved it to the center above the microphone panel. It is comprised of three parts, the glasses holder, the clip, and the optional bottom (to make a more finished look). 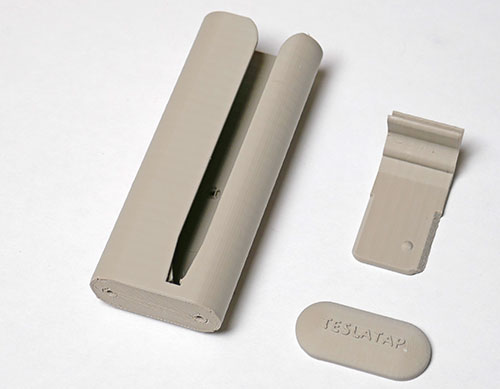 The clip slides into the back of the large holder. One screw locks this in place, and two more hold on the cap. I used 3 tiny screws (M2 x 3mm) that will self-thread. With this version, I also switched from the glossy red to a matt sand color that matches the headliner.  I made a few more minor versions for a final design that works great. Here’s how it looks when assembled. 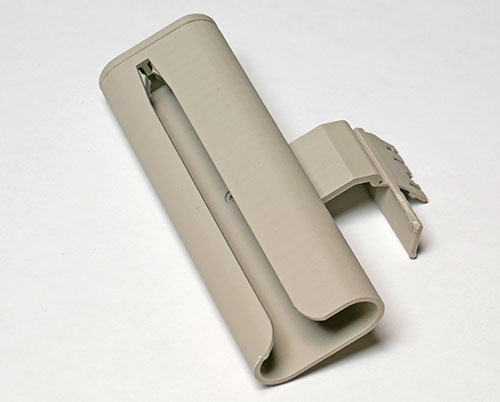 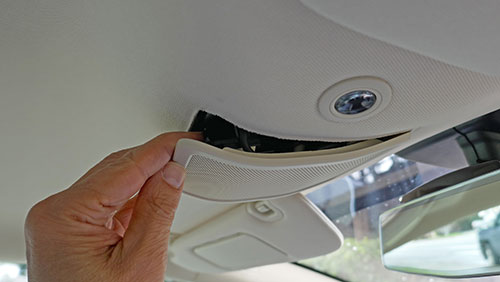 Fit the clip to the center and close the microphone panel. The clips in the panel are strong enough to hold the sunglasses holder. 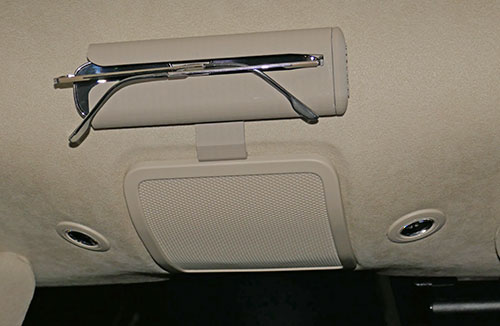 While this design works great for my specific glasses, the grippers are designed for my glasses and are unlikely to work for a different set of glasses. I’ve only tested the design on the refreshed Model S with a metal roof.  I expect it will work fine on earlier cars too, but I’m less clear if it works with the pano roof or an all-glass roof. When I have a chance I’ll have to find some other cars to test it out.

For all three parts, I used 100 μm layer height and a raft. The largest part also requires support. To reduce lift from the build plate I added some thin bars, which are cut off after printing. Like my other in-vehicle printed projects, you should avoid PLA, as it will warp under typical temperatures encountered.

While I started out with a red filament, it’s a bit bright. It took me many hours of searching to find a filament that matches the headliner color. There are very few choices for this color in PETG or ABS. I finally found a PETG in sand from 3DXPro.  A 1 kg spool used to cost about $38 but does not appear to be made any longer (as of Oct-2022).  A low-gloss product looks far better than the typical shiny PETG. This filament requires somewhat higher extruder temperatures and I used 270° F.

Here are the three STL files, which should be a good starting point if you want to make this project. For one set of final parts, it took about 10 hours of printing. You can speed it up by going to 200 μm layers, which I did for earlier prototype versions.  Although two files say “visor” the name was leftover from the earlier visor design.

My guess is the holder will need to be modified for your glasses. Let us know if you build or modify it and how it worked for you – or just buy a generic sunglass holder!

I recently got new glasses, and they didn’t fit!  Ok, time for a better design. With 5 new versions, I made a change to drop the glasses in from the top. This works better all around. Here are the links: