FM/XM Radio for the MCU2 Upgrade

This guide shows how to add FM or FM/XM to a vehicle that has been or is being upgraded from MCU1 to MCU2. The issue is caused due to the radio in MCU1 cars having the audio sent to MCU1 in analog form and is controlled via the CAN bus.  MCU2 requires the audio, in digital form, and control signals to be sent via ethernet from a new digital radio.  (Sep-2020 update)

According to service, it is not possible to make FM/XM work with the retrofit, but we are not convinced. It makes sense that Tesla doesn’t want the extra cost and labor to replace the radio with a new one as it is not a simple process, but we expect it can be done with anyone willing to spend some DIY time with your car and with a little help from Tesla. While we’ve not yet completed the project, we’ve documented the steps to make it work.

Here are the latest Tesla part numbers for the upgrade and radios. In the USA the current radio cost (any S/X version) is $225.00. it should be noted that Tesla’s policy is to not sell a specific part for your car that does not match what was originally on the car. For example, if you didn’t have UHFS/Premium sound with the Subwoofer, they will not sell you the Subwoofer.  What this means is if you have FM only right now, it is unlikely they will sell you the FM/XM tuner.  For that matter, they may not sell you the digital tuner at all to replace the analog tuner.  Note that the catalog states “No sale restriction”, but you may get pushback from the Tesla parts department. Hopefully, when you explain that the radio is required to make FM work with the MCU2 upgrade, they may relent.  You can also scan the used market like eBay, but we’ve not seen any show up over the last few months.

Parts needed to make the wiring harness
* All the wire pairs are the same set of colors, but we used a red and black Sharpe marker to color the white/blue wires in the pictures below for clarity. There is no need to do this so long as you keep proper track of the wires and polarity.

We made a small number of cables available on eBay for $57.95 with free USA shipping. This includes the assembled cable, the mounted 3D printed cover, the optional blue power LED, and a tie wrap. We also tested the cable to ensure the 12v polarity and LED works. On the terminals, we crimp and solder each one to ensure the best connection possible.

Update: I’m sorry to say we’ve sold out of our 2nd batch of cables. At this time, we are not planning to make any more.  All the parts and details on how to make one are here. If you or someone else wants to go into production, we would be happy to provide a sales link here. Note that the digital radio connector is very hard to source, so if you embark on this project, get that part first. The other parts are easier to obtain.

The analog radio connector is only available in a PCB mount style.  In some ways, this is easier to connect to, but the rear pins are exposed. I’m sure there are a number of ways to cover these pins. We elected to make a 3D printed cover that press-fits onto the rear of the connector.  As a bonus, since the material we chose is translucent, we can install an LED on the back of the connector to confirm the connection is working.  It consumes a negligible 1 mA when the car powered up. 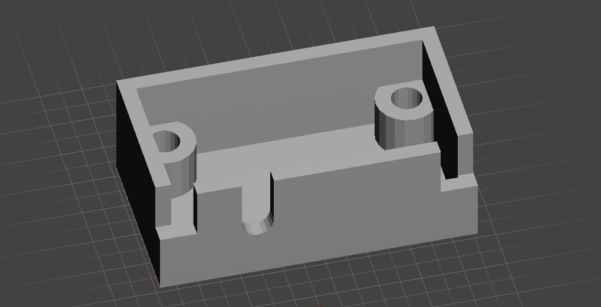 For the 3D print, we use PTEG filament, which is suitable for higher-temperature environments, such as the vehicle cabin.  Do not use PLA, as it will warp and melt if the cabin gets too hot. We used Formfutura TransBlack HD Glass filament, with the bed at 80°C and nozzle at 225°C, 0.2mm layers, and 100% fill with supports. Plenty of other higher-temp filaments may work fine too, but we’ve not tested any others.  Use our STL file V9 to make the 3D print.  Once printed, you’ll have to physically remove the excess support.

If you don’t have a printer, you can use 3Dhubs to find someone to make the cover for you. A quick check appears the part can be made for less than $20, depending on the quality.

For the radio replacement

For making the cable

Installation before or after MCU2 Upgrade

The big question is whether Tesla’s service is willing to do this. It may be some techs will and some will not.  Of course, if you have the MCU2 upgrade performed before you install the new digital radio, you’ll have to do the connection yourself.

Connecting the FM ethernet to MCU2 yourself may require more dashboard disassembly, and possible pulling MCU2 partly out.  Here’s one video going through the steps to remove MCU1, which are the same steps for MCU2. No cables should need to be disconnected. When removing the MCU, you may want to disconnect the power before starting.  In the passenger side fuse box, remove F235. 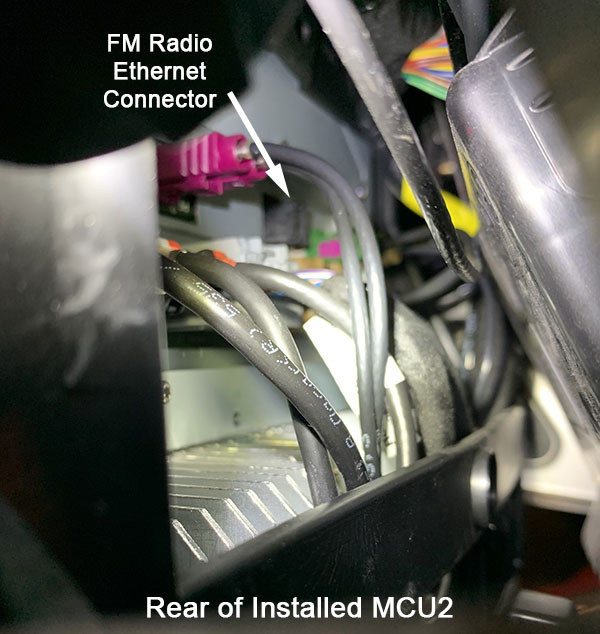 Rear view from the passenger side, inside the dash, radio not connected 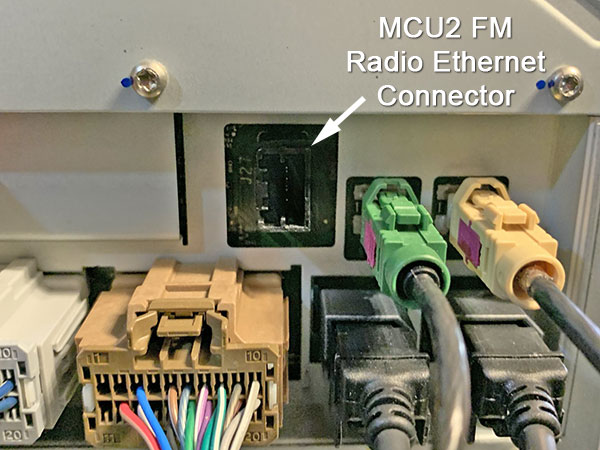 We discovered that if you remove the analog radio connection while still using MCU1 there are no error messages. Removal will stop new software updates from installing.  Simply plugging the analog radio back in allows an update to be installed.

The radio is mounted to the left of the steering column behind the padded dash panel. #4 in the image below. There are two modules next to each other. The left module is the premium amplifier for cars with UHFS, and the right module is the radio tuner. It is not all that easy to access, but we’ve outlined the basic steps to get to it. 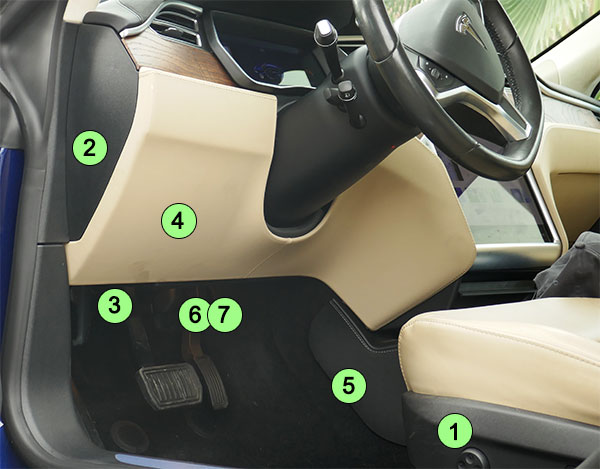 It may be helpful to see a video on Removing MCU1.  It shows some of the steps we outline above as well.  Here’s a video on a 2014 Model S that shows the amplifier and radio removal at the 17-minute mark. A refreshed Model S is similar with minor differences.

The rear of the analog FM only radio

We will connect to the Tesla analog radio connector to get 12 v power for the new radio.  The mating Molex connector is only available in a PCB mount variant. We made a 3D printed cover to insulate the PCB pins using PTEG.  Do not use PLA, as it will deform under high cabin temperatures. As an alternative, perhaps you could use hot-melt or perhaps some other means to insulate the back pins once you’ve attached wires for power.

The digital radio is much smaller and is mounted on a bracket that fits into the same spot where the analog radio resided on older cars.  It has the same style antenna connections (shown on the bottom) but a different data connector on the top (purple). There are no AM radio electronics in this module, so there is zero hope for those that want AM radio. The digital radio is made by Harman (now a Samsung company) and manufactured in Mexico. The radio module, not including the bracket, looks very similar to the Model 3 FM radio, which has a third connector to power the antenna amplifier. I suspect a model 3 radio could be used if you don’t need XM since the connectors appear the same. You would have to fabricate a new bracket. I only mention this, as eBay has a number of used Model 3 FM radios, but I’ve not seen any Model digital S/X radios for sale on eBay in the last few months. 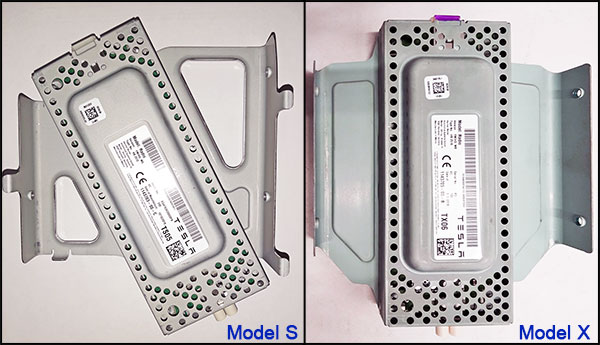 Side view of the 10-pin connector for power and data

The digital radio connector uses the TE Connectivity 2302475-2 housing and requires five terminals TE Connectivity 2-1703930-1. This connector only has power and ethernet data (4 wires). The way the connector housing works, there are locks on both sides to ensure the terminals do not slide out.  Since there is only one terminal in slot 4, on the bottom row, we need to crimp one terminal without a wire and insert it into slot 10, so the housing properly lock.  The lock tends to pop open without this extra terminal inserted. Be aware the tiny terminals are difficult to crimp and even more difficult to get into the housing.

Cable wiring diagram to add a digital FM/XM radio to MCU2 upgrade. Power is supplied from the old analog radio connector and you can include an optional power-on confirmation LED as part of the analog connector. Some vehicles are not equipped with an XM radio antenna. 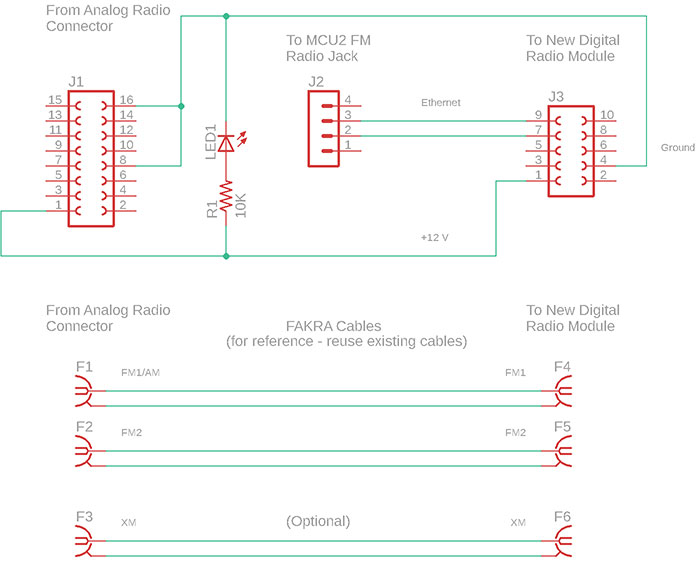 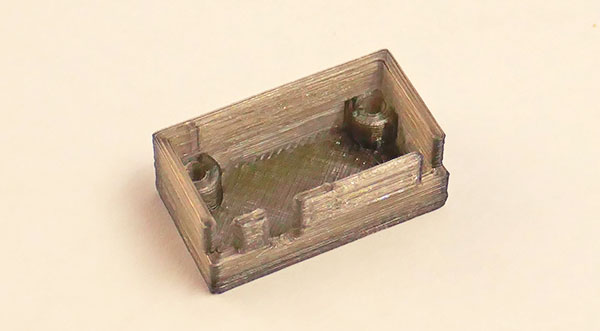 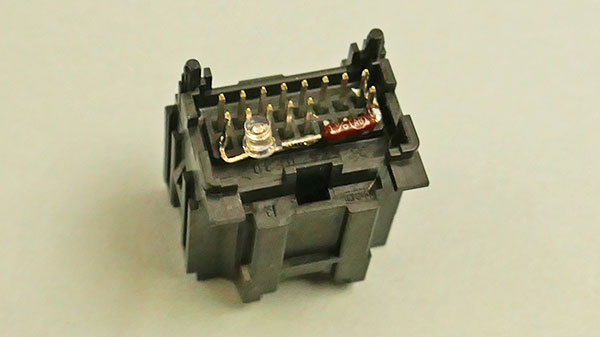 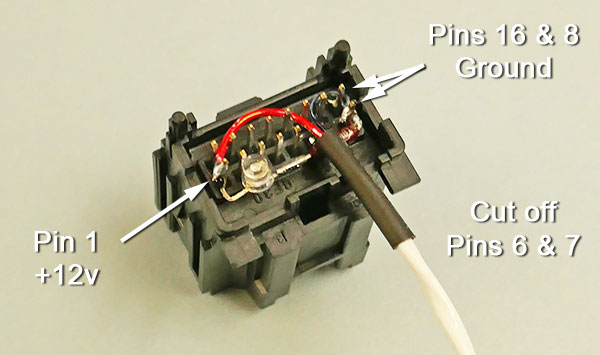 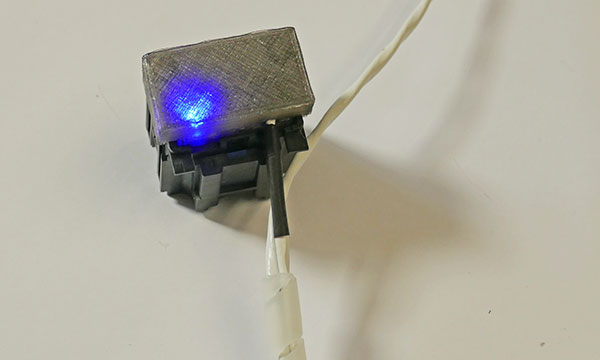 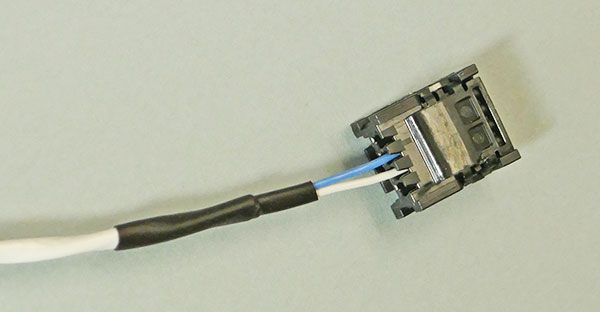 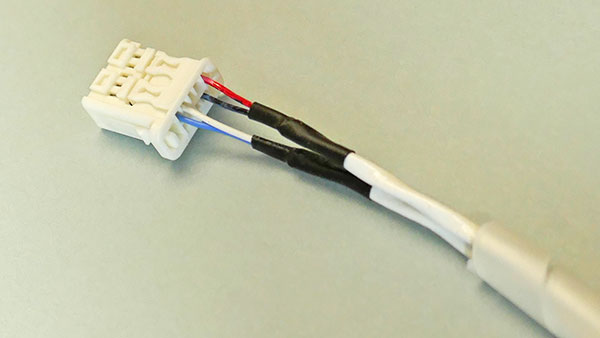 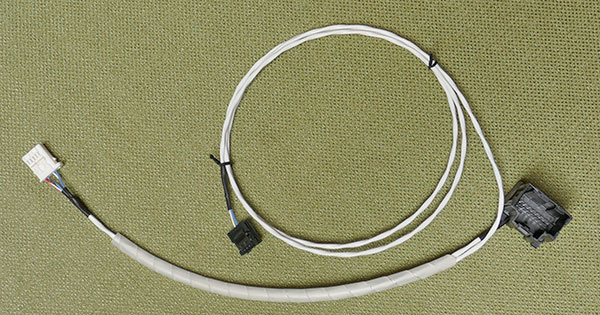 When installing the digital tuner, first connect the two (FM) or three (FM/XM) antenna connections as they may be difficult to get to once installed.  On the cable assembly, attach the large 16-pin black connector to the connector that used to go to the analog radio. Use the tie wrap around these connectors and the cover to ensure it will not come apart.  Secure the connector so it doesn’t rattle around behind the dash. You may want to warp some felt around the connector as well. The connector back should light up blue if power is on.

Connect the smaller 10-pin white connector to the bottom of the digital tuner.  Run the long white ethernet cable to behind MCU2. 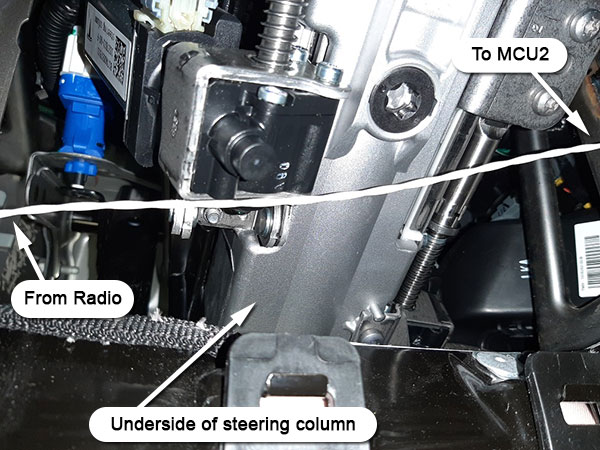 The cable under the steering column 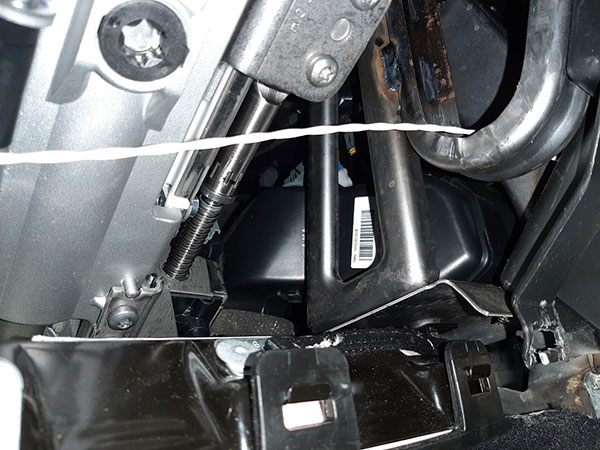 Cable route over to MCU2 via cubby

Secure the cable so that wire cannot be caught by the steering column adjustment worm gear.
Ideally, you’ve installed the digital radio and wiring prior to the MCU2 upgrade. You can route the wire to just on top of the cubby.  To remove the cubby, press down hard near the lower outside edges. It is only held in with two snaps.  You could coil the excess wire there or perhaps poke it up behind MCU1.  For the upgrade, ask the service center to connect the FM radio ethernet connection. 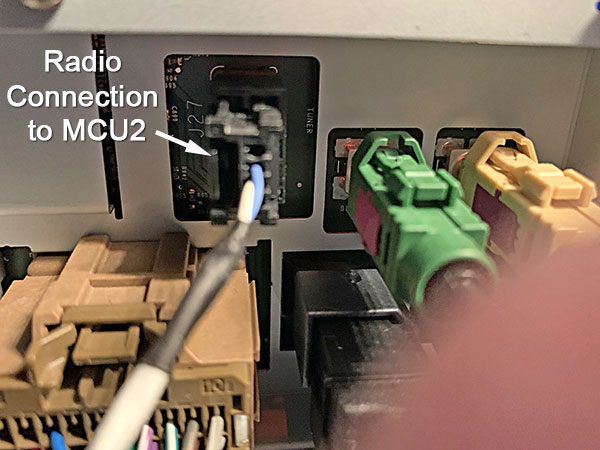 Radio connection to the rear of MCU2

As of this writing, the biggest issue is not the hardware or wiring, but making the car recognize the newly installed digital FM radio. We have confirmed that doing a reset on MCU2, a power-down, or installing a new software version does not activate the radio. It is not like a Windows PC with plug-and-play hardware detection.  It really needs to be provisioned by Tesla service.  Kyle recommends the following approach when you go in for the MCU2 upgrade:

I know that my MCU2 retrofit means that I will lose AM/FM/XM radio because part of the retrofit process does NOT include replacing the old analog tuner that worked with MCU1 with the new digital tuner for MCU2.

I have replaced the tuner myself, and all the wiring is completed. I’ve even routed the FM ethernet cable (white) to the rear of the MCU so you can plug it into MCU2 during the retrofit.

Would you mind doing this while Toolbox is connected?

We have heard that service centers are not allowed to make configuration changes like this. I’d argue that the FM radio is a Tesla part, and clearly MCU2 is designed to be compatible with Tesla’s digital tuner.  The car had FM service, so it’s not enabling a feature that didn’t exist previously in the car.  Hopefully, if you do this in a respectful way, and treat the techs right they will do these extra steps for you, but I fear we may need to get corporate to relent before a service center can or will make the change. The more owners that ask for it, the more likely Tesla may accommodate us.

A big thanks go to those that helped with this project and supplied some of the photos, including akikiki, Kyle, Art, as well as a few others!