Some owners may be surprised to learn their car includes a 12v battery. We’ll explain why and delve into everything about the 12v battery used in Tesla vehicles today.  (May-2022 update)

The earliest Tesla roadsters didn’t include a 12v battery but used a portion of the main lithium-ion pack to supply 12v for accessories and lights.  This was not ideal, and in 2010 Tesla switched to a separate 12V battery in the Roadster 2.0. All Tesla vehicles since that time also include a separate 12v battery.

The reason for a separate 12v battery is to power critical systems in the event of a high-voltage battery disconnect. This keeps key systems operational such as emergency blinkers, airbags, seatbelt pre-tensioners, brake booster, and a host of other systems. The high-voltage battery might be disconnected due to several rare events – such as a high-impact crash, internal main battery pack problems such as some types of cell failures, a contactor failure, and a few other unlikely situations.

Many parts of the Tesla vehicles today are powered by the 12v system, including:

Only a few items are directly powered by the high-voltage battery pack. This includes the traction motor(s), the a/c heat pump, and the DC to DC converter for 12v power and charging the 12v battery.

Tesla ran into a major snag with the introduction of the Model S in 2012.  The 12v battery was sourced from an American firm, who unbeknownst to Tesla, outsourced the battery to China, and the Chinese company outsourced it to Vietnam! The quality was sub-standard and rarely lasted more than a year. Tesla switched vendors in 2013 and replaced all the marginal batteries in early build cars with a far more reliable battery under warranty.

The latest 2022 Model S/X/3/Y use a small Lithium-Ion battery pack, designed for supporting a wide temperature range and long life.  This CATL supplied battery pack includes 4 prismatic NMC 3.7v cells, charging and monitoring electronics, and a LIN bus connection to communicate with the vehicle.  This pack is 6.9 Ah, with 99 Wh of energy, and typically outputs about 15.7v when fully charged. 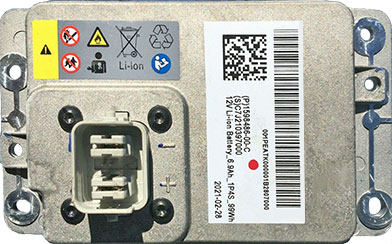 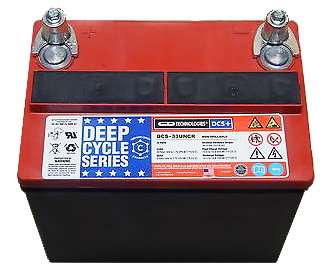 The Model X uses a 40 Ah AGM battery. The primary battery used is the AtlasBX with the model 60B19RS. 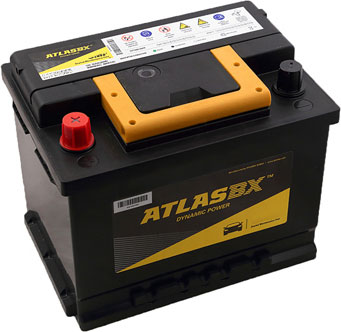 AGM batteries provide more power for size and weight than traditional lead-acid batteries. Deep cycle versions, like those used in Tesla vehicles, are designed to be repetitively charged and discharged. If you were to use a typical lead-acid battery in this application, it may only last a few months!  AGM batteries are also sealed, which eliminates acid spilling accidents and the need to periodically add water.

In the 2022 Model 3/Y and late 2021 and 2022 Model S/X, the 12V lithium-ion battery should last 10-15 years. The rest of this section deals with vehicles with the  AGM battery, which lasts about 3-4 years for most owners. Paradoxically, if you put a few miles on the car, it may last as little as 1-2 years. The difference is how many discharge/charge cycles the battery goes through and how deeply the battery is discharged. When driving on older cars, the DC-DC converter helps power the 12v system, and fewer charge cycles occur. A car left sitting, will need more charge cycles, and will age the 12v battery faster.  Some Model S owners still have the original battery after 4 years and over 170,000 miles of use! 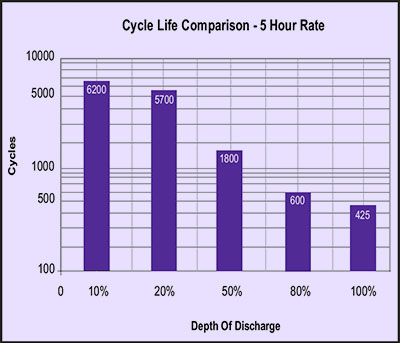 Your Tesla maintains power for some key computer systems all the time, so you can disarm the alarm, unlock the car with your FOB (or phone for the Model 3), and when you enter the car, everything starts up without any pause. In addition, the cellular connection for remote access needs power. All these systems require power even when the car is not in use. This is often called the car’s vampire drain. Tesla, via software, has significantly reduced the vampire drain of all cars over the years, but it can’t be eliminated.

The newest cars use modules that take a bit less power when the car is parked, so that helps. Even the oldest cars should easily get 2-3 years of 12v battery life, although there can be rare exceptions. Just like ICE cars, sometimes the battery fails prematurely.

What is Different About How Tesla Uses the Battery?

Often an ICE car goes 3 to 5 years before replacement.  The way the 12v battery is used in ICE cars is quite different than that used in an EV. When the motor is running, normally the alternator powers all the 12v items in the car and charges the battery. The primary use of the 12v ICE battery is to start the car, which takes 2-3 seconds with very high currents.  After starting the car, the battery is not really used. When the car is off, very little power is used, otherwise the battery would die in short order.

A few BMW ICE models, and perhaps other makers, use a far larger battery and intermittently use the alternator. This reduces gas use with less alternator drag on the motor. The downside is the far more charge/discharge cycles mean the battery is replaced about once a year, a $700 hit in the BMW!

You can improve the battery longevity by turning off various items that cause vampire drain when the car is not in use.  This includes Sentry Mode, special climate modes, and others.  See our detailed article on Vampire Drain for more details.

For most owners, the battery replacement cost is a negligible part of the ownership costs. Having advanced features like Sentry mode may be worth more to you. than a slightly shorter 12v battery life.

The 12v battery is always charged via a DC-DC converter from the main battery pack. This takes the pack’s high voltage and converts it to about 14v to charge the 12v battery. It’s a bit more complex, as the voltage to charge the AGM battery is tightly regulated and is compensated due to temperature.  The latest S/X Lithium-Ion 12v battery has charging circuitry inside the battery. 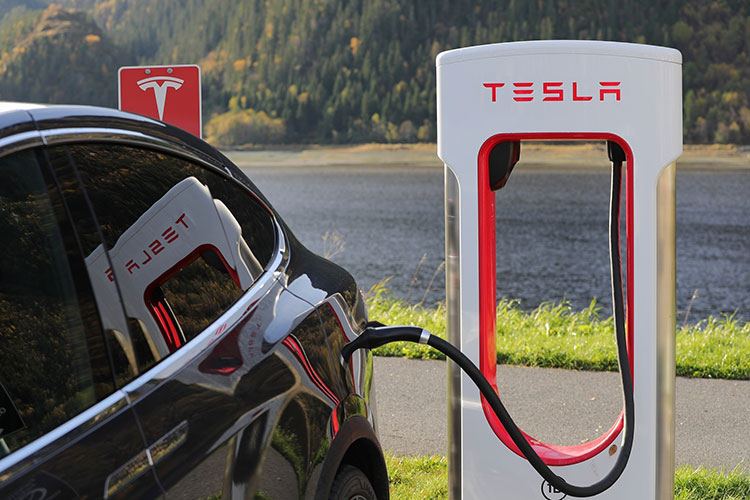 Even when you are charging the car, only the main pack is connected to external power.  While quite rare, if the DC-DC converter fails, the 12v battery can no longer be charged. 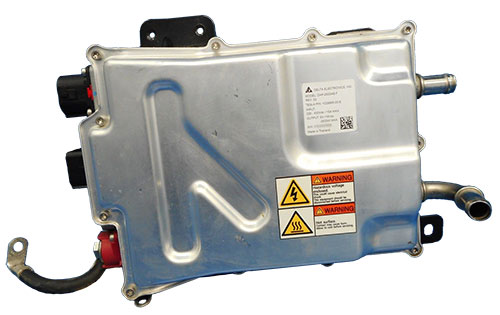 The Model 3/Y and the S/X manufactured after Feburary-2021 integrate the charger and the DC-DC converter into a single package, the PCS (Power Conversion System).

Tesla included additional hardware in the battery to help detect when the battery is nearing its end of life. Should the battery get within 3-4 weeks of the end, Tesla warns you with a clear message that the 12v battery needs replacement. This is dramatically better than most ICE cars, where the battery dies without much if any, warning.

Part of the reason ICE car batteries often die unexpectedly is the type of battery used. A standard lead-acid battery will degrade over time, but the lead sheds during use and can short out plates at some point, causing immediate cell death. An AGM battery, like the ones Tesla uses, should never fail this way.

In all Tesla, the 12v battery is located under the hood. Over the years and models, it has moved around somewhat. The classic Model S RWD had the battery deep on the passenger side in front of the firewall. This location is tricky to get access too, but a trained Tesla tech can often replace this battery in less than 20 minutes. For someone not familiar with the process, it will take quite a bit longer.

Starting with the AWD Model S, the battery was relocated to be easier to access and replace – on par with most ICE cars. The location remains about the same for the S, X, 3, and Y. There are several easy to remove plastic panels to gain access to the battery. No tools are required to gain access. 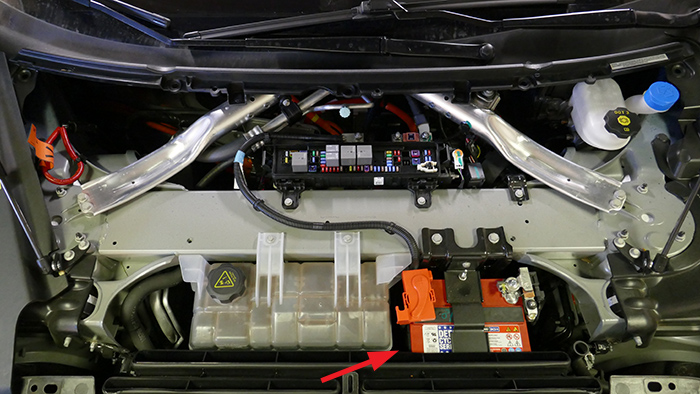 What Kills an AGM Battery?

Over time the ability to charge and discharge effectively slows due to sulfation. Lead sulfate accumulates on the negative and positive parts within the battery during discharge. Over many charge/discharge cycles this process reduces the amount of energy that can be stored and extracted.  At some point, the battery is considered bad, even though it continues to work at some level. With proper instrumentation, such as done in the Tesla, a degraded battery can be detected well before the useful end of life.

Fully discharging an AGM battery is bad, but not normally fatal. Fully discharging an AGM battery does reduce the battery’s longevity. Normally this never occurs in a Tesla, but if a vehicle is not connected to a charger, and the main battery is drained to 0% SOC (which has a hidden remaining charge), the 12v battery will stop being charged to protect the main battery. Within a few days, the 12v battery will be drained. 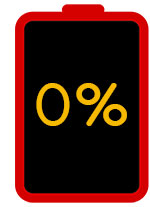 One rare failure mode is open contact between two cells.  This is usually caused by improper manufacture of the battery or an external short.  The battery voltage goes from normal to zero as soon as the open occurs, usually early in the life of the battery.

Heat is also bad for an AGM battery, but the heat conditions encountered in a Tesla are fine. AGM batteries are not suitable in an ICE engine compartment that exceed the AGM’s maximum charging temperature of 140°F (60°C).

These batteries use different chemistry that works in a Tesla and should give superior life over the standard AGM battery. This special chemistry is not as energy-dense as conventional Lithium-Ion cells, so they are not effective for the main battery, but can work well in Tesla’s 12v application. These batteries handle a wide temperature range, support deep discharges, and many more charging cycles than the AGM battery. The only downside we see is the expense.